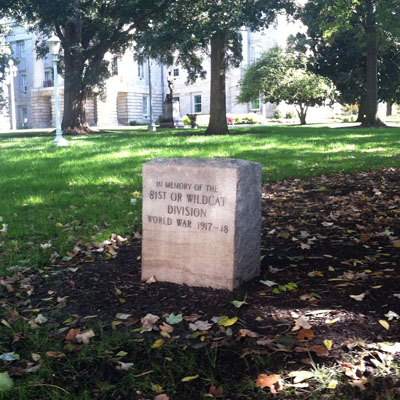 81st "Wildcat" Division Monument
Raleigh
View complete article and references at Commemorative Landscapes of North Carolina at: https://docsouth.unc.edu/commland/monument/346
Description: This small stone monument has a smooth, inscribed face with rough cut top and sides. It is dedicated to the 81st Infantry Division for their service in World War I.
Inscription:
IN MEMORY OF THE / 81ST OR WILDCAT / DIVISION / WORLD WAR 1917-18
Dedication date: 10/10/1942
Materials & Techniques: Stone
Sponsor: Wildcat Veteran's Association
Subject notes: Although officially organized as the 81st National Army Division, the battalion came to be known as the Wildcat Division and entered the war theater in France toward the end of the war in 1918. With draftees primarily from North Carolina, South Carolina, and Florida, the group took on the name to reflect the fierce fighting and tenacious wild cats of the South and adopted a patch made from the silhouette of the cat as their insignia. They fought in the Meuse-Argonne Offensive in 1918 and were in combat against the Germans in Verdun when fighting ceased on November 11 with the armistice. The Wildcat Division suffered 1,104 casualties during their short time in the war.
Location: The monument is located on South Salisbury Street on the southwest corner of the North Carolina State Capitol grounds. The front of the monument faces the street.
Landscape: The monument sits on the lawn beneath mature shade trees.
City: Raleigh
County: Wake
Subjects: World War I
Latitude:
35.7799
Longitude:
-78.63994
Subjects:
Monuments
Places
Authors:
Commemorative Landscapes of North Carolina
Origin - location:
Wake County
Raleigh
From:
Commemorative Landscapes of NC, University of North Carolina Chapel Hill.