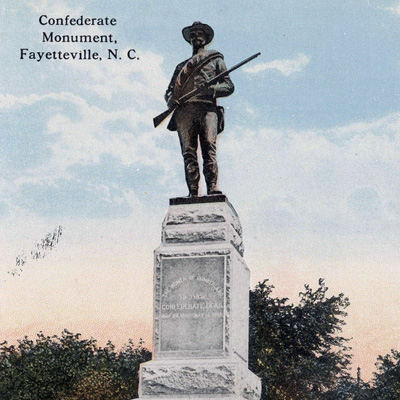 1902 Confederate Monument
Fayetteville [Removed]
View complete article and references at Commemorative Landscapes of North Carolina at: https://docsouth.unc.edu/commland/monument/3
Description: This monument consists of a bronze statue of a Confederate soldier holding a gun; the soldier stands atop a pedestal which is flanked by two small cannons. Several small stones in front of the statue contain inscriptions of the rededication date and recognition of groups that worked to bring the monument into existence. Located within a triangle formed by intersecting roads, the statue stands 23 feet tall, with the infantry man on top measuring seven feet and three inches. It was first proposed July 1, 1895. The funds were raised and an order was placed for the monument in autumn of 1901.
Additional images: Postcard image of view of Confederate Monument and Ramsey Street | Postcard image of monument in St. James' Square | Vintage photograph of monument
Inscription:
South face: THE WOMEN OF CUMBERLAND / TO THEIR / CONFEDERATE DEAD / MAY 20, 1861 - MAY 10, 1902
North face: THEY DIED IN DEFENSE OF THEIR / RIGHTS
East face: FOR THEY SHOULD FALL THE TEARS / OF A NATION'S GRIEF
West face: LORD GOD OF HOSTS BE WITH US YET, / LEST WE FORGET; LEST WE FORGET
The stones in front of the monument are inscribed: THIS MONUMENT WAS RESTORED / THROUGH THE GENEROUS EFFORTS / OF CONCERNED CITIZENS AND THE / GROUPS REPRESENTED HERE, AND / WAS REDEDICATED ON MAY 10, 1992 / RESTORATION BY FAYETTEVILLE MONUMENT WORKS.
IN REMEMBRANCE / CO. H., 1ST N.C. VOL. REGT. / FAYETTEVILLE INDEPENDENT / LIGHT INFANTRY 'THE BETHEL REGIMENT
DEO VENDICI / FAYETTEVILLE ARSENAL CAMP / SONS OF CONFEDERATE VETERANS
IN MEMORIAM / J.E.B. STUART CHAPTER / LULIE BIGGS MACKETHAN CHAPTER / UNITED DAUGHTERS OF THE CONFEDERACY
IN TRIBUTE / THE MICHAEL TERRENCE FOUNDATION / HISTORIC FAYETTEVILLE FOUNDATION / THE JUNIOR LEAGUE OF FAYETTEVILLE
Dedication date: 5/10/2002
Creator: I.W. Durham, Designer
Materials & Techniques: Granite base, bronze figure.
Sponsor: The Ladies Monument Association (president Carrie Mallett), which became the local United Daughters of the Confederacy (UDC) chapter in 1901, as well as the Women of Cumberland County.
Cost: $2200
Unveiling & Dedication: The monument unveiling and dedication was an elaborate celebration. It began at 4 p.m. with a procession lead by the chief marshal J. H. Carrie and proceeded through Hay and Green Streets to the monument in St. James' Square. A newspaper account indicated a crowd of some four thousand, including three hundred veterans and five hundred school children. "The Old North State" was sung followed by a prayer lead by the Rev. I. W. Hughes and the singing of "Tenting Tonight" by a choir. Major E. J. Hale gave the address, and the extensive contents of the corner stone were read by a Mr. Rose along with the recitation of a poem written by Miss S. A. Tillinghast for the occasion. The ceremony also included the recitation of a poem written on a Confederate Bill. The day ended with each veteran receiving a small bronze cross pinned on his breast.
Post dedication use: The monument was the location for at least two Confederate Memorial Day celebrations. The statue was moved in 1951, and was restored and rededicated on May 10, 1992, ninety years after the original dedication, at which time the small inscribed stones surrounding the monument were added. In May 2002, it was moved to its current location and again rededicated on May 10, 2002.
Subject notes: The monument was dedicated to the 2,416 soldiers of Cumberland County that fought in the Civil War.
Controversies: There has been some controversy over the orientation of the monument. In its original position in St. James Square, the monument faced south. UDC members suggested that this represents a soldier returning home from the war to rebuild the South. However, some think that the southward orientation gives the impression that the soldier is fleeing from the Yankees. Others think that the direction south was chosen because General Sherman entered Fayetteville from that direction, so the statue is facing him head on. When the statue was relocated in 2002, it was turned to face north, since a park was directly north of the statue. On June 27, 2020, the monument was removed and placed in storage by its owners, the Sons of Confederate Veterans and the Daughters of the Confederacy.
Location: The monument sat in the triangle formed between the intersection of East and West Dobbin Avenue, Morganton Street, and Fort Bragg Road, facing northeast.
Former Locations: The monument was formerly located in the center of St. James Square, at the present day intersection of Grove, Green, Rowan, and Ramsey Streets. This was the site of an old courthouse before the monument was built. The statue was moved to the northeast side of the square in 1951 when the surrounding roads were realigned. In May 2002, it was moved to its current location because the United Daughters of the Confederacy chapter felt that the intersection in St. James' Square had become too commercialized and had lost much of its beauty. The monument was removed on June 27, 2020 by the owners and placed in storage.
Landscape: The monument sat in a grassy area, surrounded by trees.
City: Fayetteville
County: Cumberland
Subjects: Civil War
Latitude:
35.05861
Longitude:
-78.90408
Subjects:
Monuments
Places
Authors:
Commemorative Landscapes of North Carolina
Origin - location:
Cumberland County
Fayetteville
From:
Commemorative Landscapes of NC, University of North Carolina Chapel Hill.

The statue and canons were

The statue and canons were removed in 2020 by the Arsenal Camp, SCV. Only the marble section remains.