by David Stick and Kathy Carter, 2006 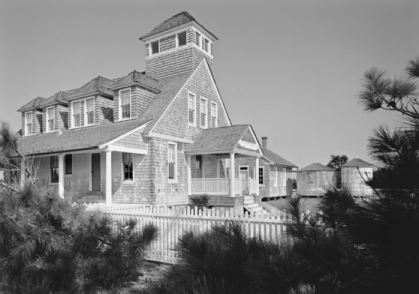 The Mirlo rescue, conducted by the Chicamacomico Coast Guard Station (originally part of the U.S. Lifesaving Service) on 16 Aug. 1918, is considered one of the most dramatic operations in U.S. Coast Guard history. The British tanker Mirlo, a 6,679-ton vessel with a crew of 52, was transporting a full load of gasoline from New Orleans to Norfolk when it struck a German mine off of Wimble Shoals early in the afternoon. The initial explosion rendered its engine room and wireless inoperative, and a second blast set the cargo of gasoline ablaze. With no hope of saving the vessel, the captain and crew boarded the Mirlo's three lifeboats. The first capsized, throwing its 16 passengers into the sea. Only 6 of the men clinging to the overturned lifeboat survived a third explosion, which split the Mirlo in two and set the sea on fire with burning gasoline. The second lifeboat, with 19 men on board including the first mate, drifted aimlessly in the sea of fire. The third, carrying the captain and 16 crewmen, soon cleared the mass of flames and headed toward shore.

From the Chicamacomico Coast Guard Station, Capt. John Allen Midgett, with a handpicked crew of 6 surfmen, launched his power surfboat. The men passed the captain's lifeboat on its way to shore and proceeded toward the cloud of black smoke masking the scene of the disaster. Midgett and his crew, cutting the motor and relying on oars, were soon able to maneuver to the overturned lifeboat and haul the 6 seamen aboard the Coast Guard craft. Even as one of his own crewmen collapsed from exhaustion and exposure to the intense heat, Midgett, using motor power again, began searching for the mate's lifeboat, whose crew was both bailing water and beating at flames on the boat. Just before dusk the Coast Guardsmen sighted the lifeboat, put a line on board, and towed the boat and its 19 survivors toward Chicamacomico and safety. Releasing the mate's craft, Midgett left it and the captain's boat offshore while he off-loaded the 6 survivors he rescued first onto the beach. He then returned twice in the darkness until all 42 survivors were safely ashore.

For their exceptional bravery, each member of the Coast Guard crew was awarded a Gold Lifesaving Medal from the United States and a Victory Medal from the British government.

The seven remaining buildings of the Chicamacomico Station in Rodanthe were decommissioned by the Coast Guard in 1954. Listed on the National Register of Historic Places, the buildings are the finest extant examples of early U.S. Lifesaving Service facilities in the nation. The Gothic architecture of the original building, which dates to 1874, is itself unique, and many artifacts related to the history of the Lifesaving Service and shipwrecks are on display in the main station (1911) and adjacent buildings.