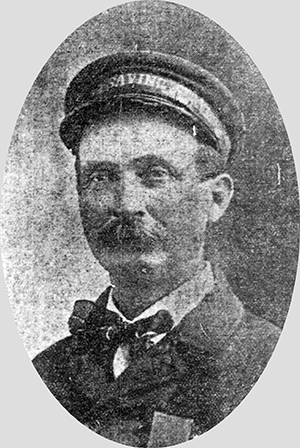 Erasmus "Rasmus" S. Midgett was a surfman in the United States Life-Saving Service of North Carolina and is remembered for his heroic rescue of the crew of the ship Priscilla, which ran aground off the coast of North Carolina in 1899. Midgett was born December 23, 1851 to Jethro and Bethany Midgett along the Outer Banks of North Carolina. He had one older sister, Maria. He attended grammar school in South Rodanthe, now known as Waves, where he excelled in arithmetic and had “good handwriting.” In May 1871, he married Matilda Anne O’Neal. Together the couple had seven children: Cora Manly, Arthur VanBuren, Marietta W., Lorenzo Dowie, Marcia Marvin, Christiana Williams, and Christopher Anderson. In the 1880s, Midgett followed other family members by joining the U.S. Life-Saving Service as a surfman for the Gull Shoal Station. Since the 1790’s, the Midgetts had offered their services to the United States Life-Saving Service. From 1876 to 1972, seven Midgetts were awarded the prestigious Gold Life-Saving medal, earning them the nickname the “Mighty Midgetts.”

The United States Life-Saving Service (USLSS) was created to protect ship crews and their cargo along the coast. It started out as volunteer-based, but became established as a federal agency in 1871. Due to the numerous shipwrecks along North Carolina’s coast, the life-saving stations were crucial to the state. North Carolina’s coast is known as the “Graveyard of the Atlantic” because of the clashing currents and numerous storms which result in constantly shifting sandbars and barriers. The Gull Shoal Station was built in 1878, south of New Inlet. A typical station crew consisted of one head keeper and six lifesavers. Training consisted of a variety of drills so the crew would be prepared for any situation. The life-saving crew would look from the watch tower or patrol their designated section of the beach on foot or horseback, looking for ships in trouble.

Around 3:00 a.m. on August 18, 1899, Rasmus was patrolling on horseback heading south. He began to notice debris in the water, a sign of a shipwreck nearby. Riding further, he saw more debris and heard shouting and screaming. Through the darkness, Midgett saw several people hanging onto a wrecked vessel. The barkentine Priscilla, captained by Benjamin E. Springsteen, was sailing from Baltimore, Maryland to Brazil when it was caught by Hurricane San Ciriaco, causing the ship to run aground three miles south of the Gull Shoal Station. 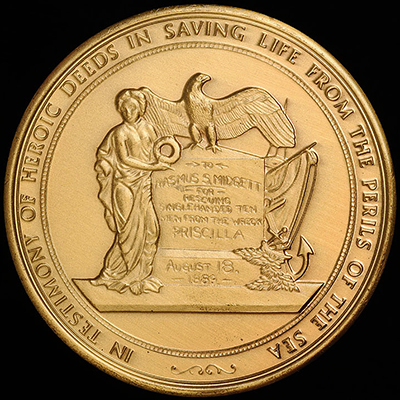 Unfortunately, the captain, his wife and son, along with two crew members were carried out to sea by the violent waves, so only ten crew members remained clinging to the wreckage. Because Midgett was so far from the life-saving station, he knew he was the only hope for these men to survive. Midgett ordered the men to jump overboard in between waves, and one by one, seven men made it to shore safely; however, three men, too exhausted to swim, remained. Midgett risked his life by swimming up to the wreckage and bringing the men to shore. In total, he single-handedly saved ten men from death. For his heroism and bravery, Rasmus Midgett was awarded the Gold Lifesaving Medal by the Secretary of the Treasury. Similar rescues were performed numerous times by members of the USLSS until 1955, when it merged with the Revenue Cutter Service to create what we know today as the U.S. Coast Guard.

Rasmus Midgett’s thirty year career as a surfman ended in the 1910s, allowing him to serve well past the required retirement age of fifty-five. He died in 1926 at the age of seventy-five, three years after his wife Matilda. Engraved on Midgett’s tombstone are the following words: “A loved one from us has gone. A voice we loved is stilled. A place is vacant in our home which never can be filled.” His childhood home has been restored and is now listed on the National Registry of Historic Places. Heroes such as Rasmus Midgett left a legacy of duty and bravery that is admired and emulated today by our military.

Midgett, Helen and Belle Stowe. “Truly One of the Mighty Midgetts,” Sea Chest: A History of the United States Life-Saving Service on Hatteras Island 4, no. 2  (1977) : 36-39. https://www.ncgenweb.us/dare/photosbios/midgettrasmusbio.html