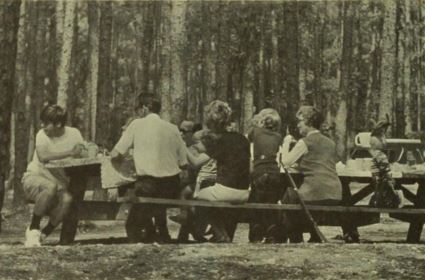 Located in North Carolina's eastern Piedmont, Medoc Mountain is not really a mountain at all: its highest point reaches an elevation of only 325 feet above sea level. It is, rather, the core of what was once a mighty range of mountains - Medoc Mountain is what remains after millions of years of erosion. The eroded peaks were formed by volcanic action during the Paleozoic Age, about 350 million years ago.


An elongated structure of biotite granite, Medoc Mountain has effectively routed the streams of the area around itself and has resisted the erosion typical of the surrounding lowlands. The park sits near the fall line, an area where the hard, resistant rocks of the foothills give way to the softer rocks and sediments of the coastal plain. The northern and western faces of Medoc Mountain have very steep slopes, dropping 160 feet over a distance of less than a quarter mile. Such rugged terrain is unusual for the eastern piedmont.

The mountain and surrounding land have long been used for agriculture. Once the property of Sidney Weller, a noted farmer and educator, the area was used for the cultivation of grapes in the 19th Century. Weller produced a highly acclaimed wine known as Weller's Halifax and is credited with developing the American system of grape culture and winemaking. It was Weller who named the mountain "Medoc," after a province in the Bordeaux region of France famous for its vineyards. Weller organized and operated an academy for area children and assisted with the development of the first North Carolina state fair in 1853.


Following Weller's death in 1854, his land was sold. The vineyards continued to produce into the early 20th Century, but the land was later subdivided, sold and used for the production of other crops. The vineyards disappeared, and little trace of them remains. The high ridge and the slopes of Little Fishing and Bear Swamp creeks are the only places in the area that have not been extensively cultivated. A grist mill operated in the area until the late 19th Century.


In the 1920s, a Boy Scout camp was built on the summit of the mountain and, a few years later, lumbermen cut the mountain forest for timber. In the early 1930s, a deposit of molybdenum was discovered near the summit. Exploration of the site occurred then and again in the late 1960s, scarring the land though no significant mining operations took place. For many years, local residents used the area for hunting, horseback riding and hiking. Numerous old roads and trails passing through the woods are evidence that these forests have long been enjoyed.


In 1970, citizens proposed the creation of a state park in the area. In 1972, the Division of Parks and Recreation surveyed a five-county area for a suitable site and recommended Medoc Mountain and the surrounding land. The

first parcel was purchased in October of 1973 for the establishment of the park, and by March of 1975, over 2,200 acres had been purchased.

Throughout the 19th and 20th centuries, much of the land in the park and surrounding area had been altered from wildneress conditions by agricultural activities. Since the establishment of the park, the wilderness character is being restored through reforestation and conservation. Much of the land is in various stages of regrowth and the forests offer a sense of renewal. Old fields, once used for farming, are being reforested with herbaceous plants and young pines. In time, mature loblolly pine forests and then hardwood forests will reign.

Few plants grow beneath the dense stands of young pines, but blueberries, pipsissewa and pink lady slipper persist. In areas of the park that were once heavily logged, mixed forests grow where stumps and understory vegetation were allowed to regenerate. Hardwoods, loblolly pines and shrubs are found together there and the forest will eventually resemble its original state.

Soils near the creeks are rich and promote the growth of herbaceous plants including jewelweed, false Solomon's-seal, Mayapple and other wildflowers commonly associated with the Piedmont. Christmas, lady, cinnamon and broad beech ferns thrive in the area. Bluffs and ravines in the park are distinctive habitats with tulip trees and sweet gums growing in moist locales and American beech and mountain laurel more prevalent on the steeper banks. Large concentrations of mountain laurel also grow here. Typically a highland species, mountain laurel is not usually found as far east as Medoc Mountain.

Medoc Mountain attracts a variety of animals. The nocturnal southern flying squirrel nests in tree cavities in the forests. More common mammals include opossums, gray foxes and white-tailed deer. Water-loving mammals such as river otter, muskrat and beaver reside near the creeks. Many animals not often observed by visitors - including freshwater mussels, crayfish, salamanders, frogs, turtles and water snakes - make their homes in the park's creeks, streams and boggy areas. The rare Carolina mudpuppy, a large aquatic salamander found only in the Neuse and Tar river systems, has been seen in Little Fishing Creek.