Rama and Hanuman go into the forest to meet Sita, as shown at a wood puppet performance in Yogyakarta during July 1986. Once Rama knows the truth about Sita and her sons, he goes with Hanuman to convince her to return to the palace as his wife and queen. Sita is understandably reluctant. In the end, the gods remind them that they were sent to earth to restore a peaceful world, which will not happen as long as they themselves are at odds. Rama admits that he acted wrongly out of insane jealousy, and Sita agrees to return.

The white Hanuman puppet on the right wears a royal Yogyakarta-style batik sarong while the Rama and Sita puppets are dressed in similar clothes but with orange and pink jackets, repectively. The faces and crowns of the wooden puppets are carefully painted, while the bodies are dressed in cloth costumes. In the background between Sita and Hanuman is a carved and brightly painted leather puppet called “the mountain,” which appears at the beginning and end of Javanese puppet performances.

A single master puppeteer controls the arm and leg sticks of all the puppets and speaks all the voices during a single performance. In this photograph, the top of the puppeteer’s headdress is slightly visible between the two right puppets at the stage horizon line.

Around some ancient royal court areas of Java in Indonesia, there is still an active wooden puppet theater tradition known as wayang golek. The wooden puppet tradition is related to a more popular leather shadow puppet (wayang kulit) genre and similar masked dances called. All these theater styles were performed in the ancient Hindu and Buddhist court centers of Java, and similar theater forms emerged in other Southeast Asian kingdoms. 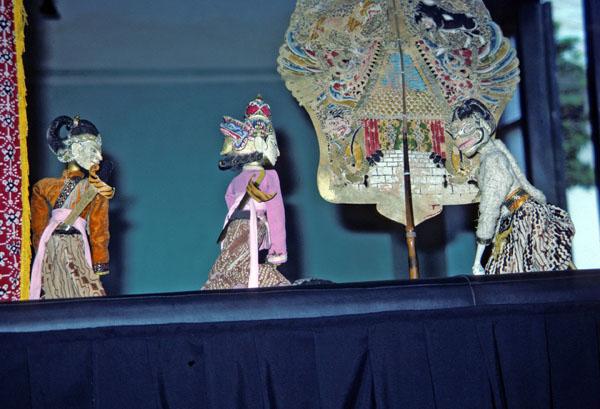