Rama and Sita tell their sides of the story to a God of Justice, as seen on a mural detail at the Emerald Buddha Temple. After years of fighting, Maleevaraj the Just agrees to hear Rama and Ravana’s dispute as a legal case.

Rama, and Sita wearing royal Siamese clothes, sit in the forest on mats with their hands in respectful prayer position. On another mat, Rama’s brother Laksman is partly visible at left. Seated behind and above them on a golden platform and throne, the God of Justice listens to each of their tales in turn. The God of Justice has a tall gold crown, four faces, and eight arms.

In Hinduism, the god Brahma also appears with faces looking towards each of the cardinal directions. Some Southeast Asian Buddhist statues use this same symbolism to convey omniscience, the ability to see everything at once.

After the stories of Rama, Sita, and Ravana are heard, Ravana is admonished by the court and told to free Sita. When he refuses, the God of Justice predicts Ravana’s defeat and death. In anger over Ravana’s refusal to accept divine judgement, the gods curse Ravana, give special power to Rama’s weapons, and then withdraw to let the war come to its conclusion. 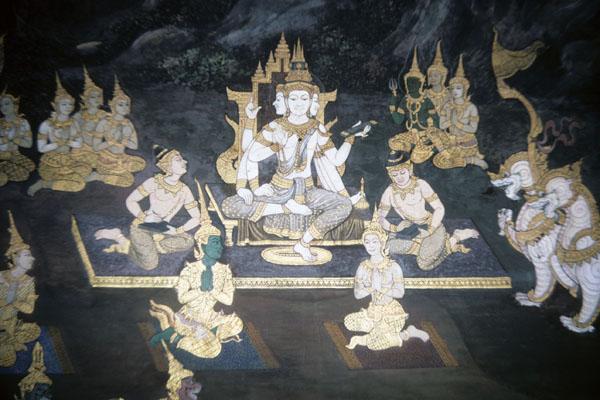