Four goddesses attend to Sita as she gives birth, as seen in a mural at the Emerald Buddha Temple. A row of four goddesses kneel beside Sita, aiding in the delivery of her and Rama’s baby son. Sita, dressed modestly in her usual royal clothes and looking ever so calm in childbirth, leans back into the arms of one goddess who supports her like a backrest. The goddess second from the left holds up a small green bundle, which represents the newborn baby boy.

The goddesses all have tear-shaped halos surrounding their heads and tall crowns, but appear otherwise dressed as Siamese royals. A male god with blue skin looks down from his halo bubble at the upper left corner.

The birthing scene takes place within a gold, brown, and blue Siamese royal pavillion. A servant woman kneels below, just outside the pavillion, holding what appears to be a flaming oil lamp, probably to provide light and help keep Sita warm. Traditionally, woman in many parts of Southeast Asia give birth beside a fire.

In the Ramayana, even though Sita has been rejected and ordered killed by the jealous Rama, she is fully protected by the gods while pregnant and through the birth of her baby, depicted here. 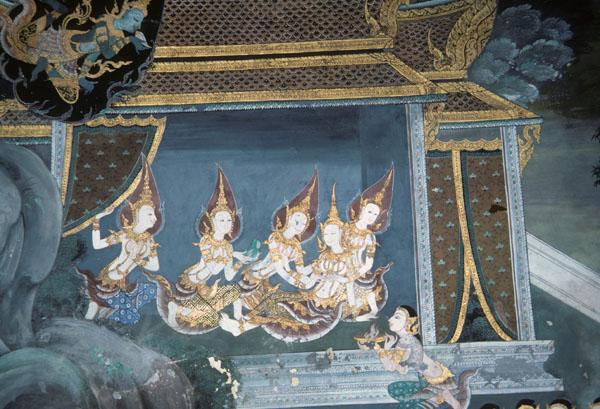