A painted mural at the Emerald Buddha Temple shows the infant Sita sitting in a gold urn as she is discovered by a king ploughing his fields. Beside Sita's urn, which protrudes from the ground, we see the king holding a wooden plough harnessed to an ox. The king, wearing a Siamese gold crown, is attended by his many royal retainers.

At about the same time that Rama's future father in Ayudhya was asking the gods' help for a son, a childless ruler in a nearby kingdom also appealed to the gods for help. One day as this king was ploughing his lands, a lidded gold urn decorated with a lotus flower design popped out of the soil beneath his plough. Inside the urn was a beautiful baby girl. The king brought this gift from the gods home to be the royal princess Sita.

The Ramayana describes Sita as the reincarnation of the Hindu god Vishnu's consort Laksmi, who was reborn as a princess in the demon kingdom of Lanka. At her birth, however, the baby called out ill omens for Lanka and its demons, so they put her in an urn and floated her down the river. She then was discovered by a king who had left his throne to become a hermit farmer, but returned to his rightful rule once he found the beautiful Sita.

Of interest here is the idea that ancient kings sometimes left the luxury of their palaces and chose to become forest hermits or ploughed fields like their fellow peasants. From what we know about pre-state South and Southeast Asia, successful farmers or farm advisors often became nominal chiefs. Once hereditary leaders emerged, they often initiated the seasonal planting and other major farm events during ritual ceremonies designed to transmit their blessing to all the kingdom's farmers and their fields.

Additionally, the story of the "royal foundling," so familiar from Mediterranean and European traditions, demonstrates how hereditary rulers without offspring often proposed mythical origins for their adopted heirs to justify the succession to their populations. 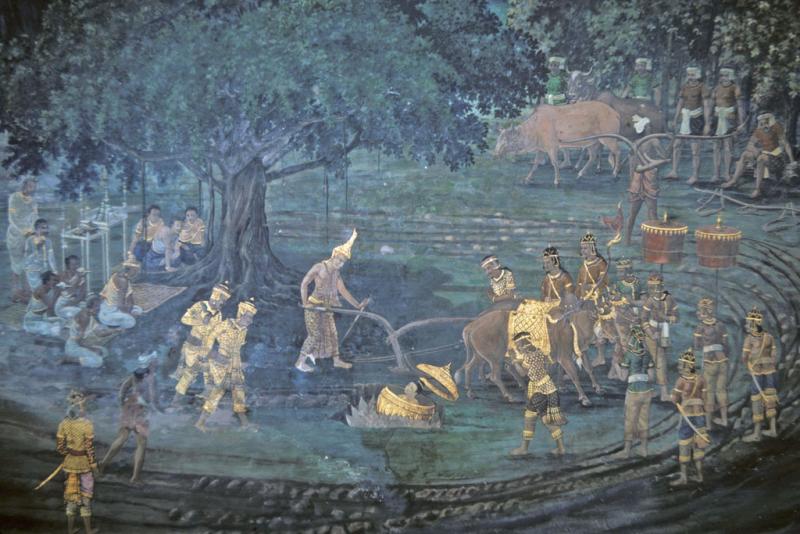