This stone house was built by Michael Braun in 1766. According to the Rowan Museum,

the site was virtual wilderness. The two-story Georgian house is indeed stately for its time with the stones on the front carefully shaped and matched, creating an impressive face to visitors. Climb to the second floor and you’ll discover high up in the end walls next to the chimneys, openings that some believed to be gun ports for fighting off hostile Indians (actually they were ventilation holes for bringing cool air onto the second floor).

Michael Braun was a German immigrant who arrived in Philadelphia in 1738 and lived in Lancaster County, Pennsylvania, for about 20 years before moving his family to North Carolina. He later served as constable and a justice of the peace in Rowan County. He died in 1808, but his family occupied the house until 1904. (The Rowan County government has more information about Michael Braun and his house.)

The "Old Stone House" is located in Granite Quarry, North Carolina, just south of Salisbury. It is the oldest structure in Rowan County and one of only a few surviving stone houses from that time period in North Carolina. Restored several times in the twentieth century, most recently in 1966, it is now owned by the Rowan Museum. 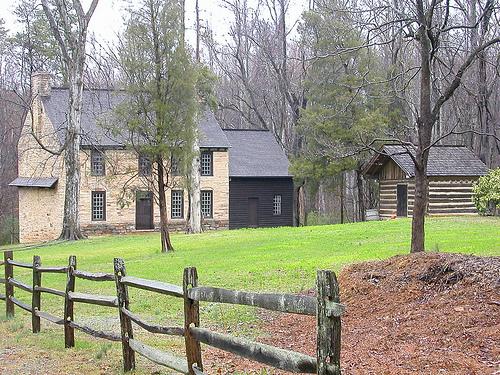 "All rights reserved" is a traditional copyright term that indicates that the copyright holder reserves for his/her/their own use all of the rights given to copyright owners under U.S. copyright law. Items that are included in NCpedia and/or ANCHOR with this rights statement appear by agreement or permission from the rights holder or the institution that holds the item. Click "Available at" to visit the website for the collection where the item appears for more information about the rights or specific uses allowed.