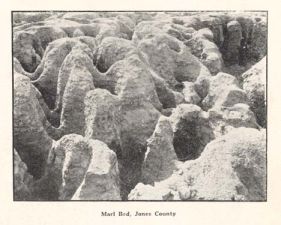 Marl beds are found along the eastern and southeastern coastline of the United States and on land across the world that was once covered by the sea. Such beds, referred to by Roman writer Marcus Varro as "white fossil clay," were formed by the breakdown of rock and the buildup of seashell, animal, and plant remains. The result was a varying mixture of sand, clay, azote, magnesium, iron, and limestone that was used by the Greeks, Romans, Gauls, Britons, and others to add lime, a natural fertilizer, to the soil.

In North Carolina, marl has been found in most of the counties that make up the coastal plain. This marl area, which consists of more than 20,000 square miles, extends west from the fall line and is in places nearly 200 miles from the Atlantic shore. North Carolina's natural limestone was far less valuable and accessible than that of neighboring states. The blue/gray and green marls, found chiefly in Pitt, Columbus, Wayne, Lenoir, Craven, Duplin, and Onslow Counties, were generally suitable only for supplemental side-dressing of the lighter and poorer state soils. Since the effect lasted for little more than a season, few farmers availed themselves of local "white fossil clay." By the early 2000s, marl beds in the state were lying dormant.

Report of the North Carolina geological survey, together with descriptions of the fossils of the marl beds (1858). Internet Archive. Available from https://archive.org/details/reportofnorthcar00nortrich (accessed September 25, 2012).

Our marl bed is being used to

Our marl bed is being used to make aglime and Feed Lime. Shelter Creek Lime and Stone in Pender County NC. Please pass the word. We would like to support our local farmers with local products.