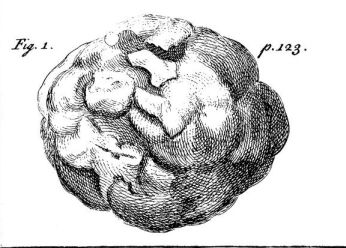 Madstones have existed from antiquity in the realms of magic and have appeared at various times in North Carolina folklore. Akin to precious and semiprecious stones, to which fortune or healing were always attributed, madstones supposedly cured hydrophobia, or rabies, but also bites of poisonous creatures such as snakes and spiders. Madstones traditionally have been animal, vegetable, or mineral in origin and are usually described as porous. In Wales and England, they were white and pink alabaster. In the Orient, tabasheer, which function as madstones, are the opals of a siliceous white or translucent substance occasionally found in bamboo joints. In the Orient, Europe, and America, bezoars (gall stones or stomach growths of hair, fiber, or calculi) found in ruminant animals such as deer, buffalo, and cattle were used for medicinal purposes.

People used madstones in two different ways. By far the most common usage in North Carolina was the application of the stone to a wound, where it adhered, exerting some suction, until it absorbed all the poison in the wound or all the poison it could hold. Then it fell off and was cleansed in milk or warm water, and, if necessary, reapplied. A less common method, used among Native Americans, was to scrape off portions of the stone and give it to the patient in milk.

The source of these stones in North Carolina was usually traveling strangers who gave them to local families. Joseph Blount Cheshire Jr., a bishop of the Episcopal Church in North Carolina, collected much information about the madstone used by the Pointer family. His close friend Benjamin F. Thorp used the Pointer stone before he inherited his own madstone and witnessed many cures by their use. Cheshire was hard put to understand the phenomenon, for though dubious of the folklore, he had complete confidence in his friend's integrity.

Pietra de mombazza, or Rhinoceros bezoar. Drawing January 1, 1753 from a letter; courtesy of Archive.org. A letter from Sir Hans Sloane Baronet, Late Pr. R.S. to MArtin Folkes Esquire Pr. R. S. Containing Amounts of the Pretended Serpent-Stone called Pietra de Cobra de Cabelos, and of the Pietra de Mombazza or Rhinoceros Bezoar, Together with the Figure of a Rhinoceros with a Double Horn. Available from https://archive.org/details/philtrans09991290 (accessed May 30, 2012).