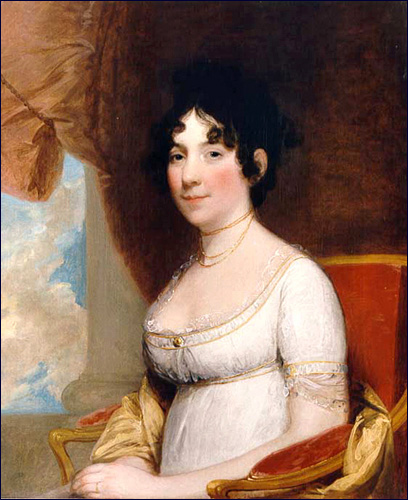 Charming socialite, cosmopolitan hostess, White House heroine, deft politician, and international woman of mystery. Any of these phrases could be used to describe the beautiful and powerful Dolley Madison, wife of James Madison, the fourth president of the United States.

While her family tree was firmly rooted in Virginia, a brief visit by her parents, John and Mary (Coles) Payne, to North Carolina in the spring of 1768 allows North Carolina to claim Dolley as one of its own. She was born on May 20th, 1768, in what is today Guilford County. Her parents were devout members of the Society of Friends, and her birth is registered in the New Garden Quaker Meeting House records.

It is at her birth, or rather the registration of her birth, that the first mystery of Dolley's life begins.  One story has it that the registrar who recorded her name simply misspelled it. Whatever the reason, she is variously referred to by biographers as "Dolley," "Dolly" (1886), "Dorothea" (1896), and "Dorothy" (1909). It wasn't until the 1950s, after the James Madison papers were published by the Smithsonian Institution, that her name was irrefutably established as Dolley with an "e."*

What is known of Dolley's early life remains clouded in mystery, as well, some of which was created by her own hand. She was acutely aware of the importance that lineage and reputation played in being accepted by 18th-century America's highest classes. And, "society membership" almost certainly went to those who belonged to the Virginia planter class. Dolley established herself early as a part of it; in later life it meant fudging the facts a bit, including clouding her North Carolina birth.

Dolley lived most of her early life in Virginia, on the family's plantation called "Scotchtown." By all accounts, hers was a quiet childhood, punctuated mostly by her Quaker upbringing. In 1788, that all changed when the family moved to Philadelphia, then the capital of the new republic. There, in the midst of the swirl of politics and culture, Dolley was quickly schooled in the power of her intelligence, wit, charm, and beauty. She married (to John Todd Jr., also a Quaker, in 1790) and had two sons. Tragedy struck in 1793, when yellow fever swept through the city and took her husband and youngest son with it. 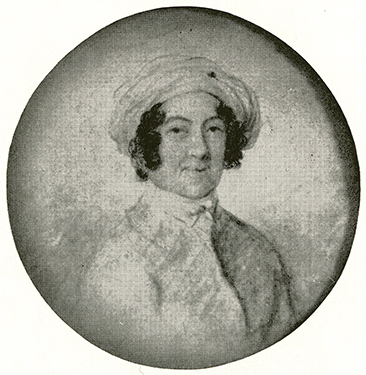 In 1794, through a mutual friendship with Aaron Burr, Dolley met and married James Madison. Madison's political rise was quick—by 1801, the family had moved to the new capitol, Washington, DC, and Dolley found herself playing the role of "hostess-in-chief" for White House events presided over by the widowed President Jefferson. It would be good preparation for her role as the First Lady, which would come in 1809.

The intrigue surrounding her legacy continues today with the story of the burning of Washington, DC, during the War of 1812, in which the White House was set on fire.  Alone with the servants at the time, the story is often told that First Lady Madison put her life in danger to save many of the treasures of the young nation. While she did order the removal of many documents, the rescue of Gilbert Stuart's famed portrait of George Washington, for which she has been immortalized in print and art, was actually one of a dozen copies he painted that was literally ripped from its frame and carried to safety by Paul Jennings, one of President Madison's slaves.

In 1817, after 16 years in Washington, DC, with eight spent in the White House, the couple returned to Virginia. They resided at Montpelier, Madison's life-long home, until his death in 1836. Dolley returned to Washington and the parties and politics in which she thrived. She struggled with finances during the last years of her life, caused for the most part by debts incurred by her eldest son.  She was supported by friends and benefactors until the end of her life, which came in 1849. At the time, hers was the largest state funeral since the nation's start. Originally interred at the Congressional Cemetery, she is now buried beside her husband at Montpelier.

*Note: Unlike today, 18th-century English spelling was not standardized. Even names could be spelled in different ways, and in writing from that time phonetic spellings of names are often used, even by family members. Even so, multiple spellings of the same name were not considered "incorrect" because "correct" spellings, especially in American English, had not yet been established.  Samuel Johnson’s A Dictionary of the English Language was not published in England until 1755 and was very expensive; Noah Webster's An American Dictionary of the English Language appeared in 1825 and contained 12,000 words that had not been published in a dictionary before. But, it only sold 2,500 copies.

It is likely that much of the debate surrounding Dolley's name stems from the fact that there was no agreed upon method for spelling it until official documents and letters were studied in the Madison papers in the early 20th century.

This helped me with my