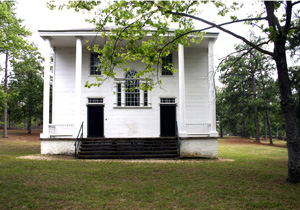 The Long Street Presbyterian Church, originally known as McKay's Meeting House, was established in 1756 on land that is now part of the Fort Bragg military reservation to serve a community of Scottish settlers. In 1758 the Reverend James Campbell, a Scotsman, established three "preaching stations": Long Street, Bluff, and Barbecue Churches. These are among the oldest Presbyterian churches in North Carolina. The third building to house the Long Street congregation, a Greek Revival derivation, was constructed in 1847 and still stands on the military reservation amid firing ranges and training fields not generally accessible to the public. Elise Academy, a boarding school, was once located near the church. In 1921 the federal government purchased the church building and six acres surrounding it for addition to the Fort Bragg; it now maintains the building, the cemetery, and the grounds.

Many gravestones in the cemetery bear the inscription "Born in Scotland," and a large monument commemorates the burial at the site of a number of Civil War dead, including 30 Confederate casualties from a nearby battle. On the last Sunday in June each year, descendants of former members of Long Street congregation gather at the church for a worship service, a picnic lunch, and a program to recount their Scottish Highlands heritage.

John A. Oates, The Story of Fayetteville and the Upper Cape Fear (1972).