In 1963, when the Rev. Vernon Tyson was pastor of Jonesboro Methodist Church in Sanford, he invited Dr. Samuel Proctor to preach for what was called Race Relations Sunday. Proctor, an African-American and one of the leading theologians in the United States until his death in 1997, was then president of North Carolina A&T in Greensboro. When Tyson invited him to Sanford, Proctor laughed and said, "Yes, and we'll be run out of town together."

In the 1950s and '60s, hundreds of white congregations in the South dismissed their ministers for such gestures of support for racial equality. Nevertheless, Proctor agreed to come. The invitation to Proctor sparked a controversy within Tyson's church, including a protest meeting, calls for his dismissal, death threats and self-doubts in the minister's own mind. "I thought they were going to kill him, " his wife, Martha, told me.

At his home in the Hayes-Barton neighborhood of Raleigh, Tyson, a warm man renowned as a gifted preacher and caring pastor, recalled the turning point in his church's struggle over whether to support Proctor's visit. The controversy had grown to the point that he called an emergency meeting of his administrative board the night before Proctor's arrival. Just as the meeting was about to dissolve in an uproar, a quiet, dignified older woman rose to speak. 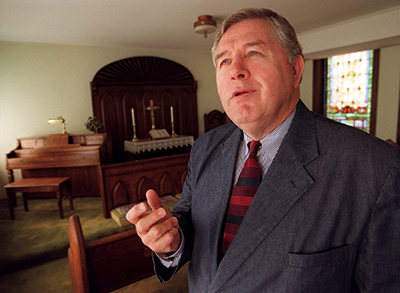 Seward, Chris. "Vernon Tyson."  Photograph. 1998. To request permission for further use or to purchase a print, please contact the News & Observer.