Dr. James Slade is the sort of impossibly old-fashioned doctor who still makes house calls and has never thought about joining an HMO. For 35 years he has been practicing pediatrics and general medicine in his hometown of Edenton, in the northeastern part of the state. His dedication and soft-spoken, steady-as-a-rock demeanor are as much a part of local life as the Delray Chevrolet that he has driven to work every day since 1958.

Dr. Slade doesn't make much of it, but he was one of the first black medical school students at the University of North Carolina. With the help of the NAACP, black students had tried unsuccessfully to enroll at UNC graduate schools since the early 1930s. Under the leadership of Frank Porter Graham, UNC slowly changed. In 1936, when N&O editor Jonathan Daniels called for UNC to fire a professor for dining with an interracial group, Graham and other faculty defended the professor, a landmark moment in the state's history of race relations. This sort of openness to racial issues made NAACP lawyers believe that UNC would be a good first target for their campaign to integrate graduate schools in the South. This occurred first at UNC law school. Under a federal appeals court order, four black students entered the law school in 1951. Other graduate programs followed. Dr. Slade enrolled in the medical school after graduating from North Carolina A&T in 1953. UNC integrated its undergraduate student body in 1955.

In 1990 UNC medical school awarded Dr. Slade one of its most prestigious honors, the Distinguished Service Award. 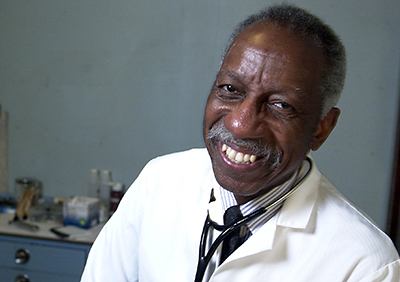 Seward, Chris. "Dr. James Slade."  Photograph. 2001. To request permission for further use or to purchase a print, please contact the News & Observer.