Leila Pigott and her husband, Dallas, owned a fleet of shrimp trawlers and a shrimp packing house in Southport when hurricane Hazel struck Brunswick County on Oct. 15, 1954. With 150 mph winds, Hazel was the only category 4 hurricane to hit the North Carolina coast this century. By comparison, Fran, which wreaked such havoc in 1996, was a category 3 hurricane with maximum winds of about 125 mph.

Hazel's winds made forests look like they had been scorched by fire. The storm killed more than 600 people from Haiti to Canada, including 19 in North Carolina. Nearly every building on the Brunswick County beaches was destroyed - 352 of the 357 buildings at Long Beach.

At her home in Southport, only a stone's throw from the Cape Fear River, Pigott recalled the day before Hazel made landfall. 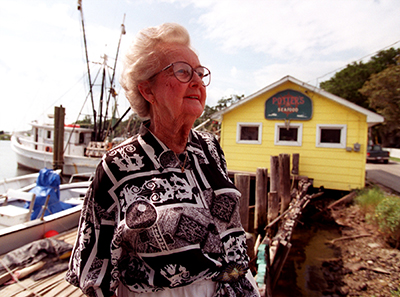 Seward, Chris. "Leila Pigott."  Photograph. 1999. To request permission for further use or to purchase a print, please contact the News & Observer.