E.R. "Mitch" Mitchell is the proprietor of Mitchell's Barbecue Restaurant in Wilson. Barbecue is one of the most cherished of all Southern foods, and Mitchell's is one of the few places that still fixes the unique, Eastern North Carolina-style of barbecue the old-fashioned way: pit-cooked all night over hickory or oak coals, basted with a homemade vinegar and pepper sauce, pulled from the bone, chopped and served hot.

The passion for barbecue goes deep into our history. When Spanish explorers first came to the Americas, they found Indians roasting meat over open fires on wooden frames and gave a name to it, barbacoa. Barbecued pig was already a delicacy in Eastern North Carolina in Colonial days, and later -- for reasons Mitchell explains -- reached its highest art form wherever farmers raised tobacco.

While I finished up a plate of barbecue and garden-fresh collard greens, Mitchell recalled when his restaurant's first master pit man, an elderly gentleman named James Kirby, began to teach him the old ways of cooking barbecue. 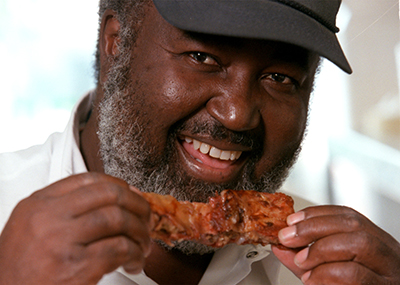 Seward, Chris. "E.R. Mitchell."  Photograph. 2000. To request permission for further use or to purchase a print, please contact the News & Observer.