McDonald's Drugstore has been on Ninth Street in Durham for more than 80 years. When I interviewed John McDonald, I asked him how things had changed over all that time. I guess I expected him to lay into the chain stores that have taken over the pharmacy business or to feel uneasy about the new tattoo and body-piercing parlor next door. Instead, he looked around the old pharmacy, with its antique soda fountain and soothing blue bottles of Hunter's Sarspirilla and Cow Balm, and he said, matter of factly: "See that south wall? When I was little, there used to be a booth there."

Not much has changed at McDonald's Drugstore. Six days a week, John and Frances McDonald still greet children with warm smiles and the best milkshakes and vanilla Cokes in town. The dress shop owner next door knows to go behind the counter and help herself, and the walls are adorned with hundreds of school photos, mementos from customers whose families have been coming to McDonald's for generations.

Their drugstore might not carry every gewgaw that you can buy at a shopping mall or chain store. But as I watched a crowd of gleeful children sipping orangeades while an older woman chatted with Mrs. McDonald about her granddaughter's piano recital, I got the feeling that maybe their customers were coming there for things that money can't buy. 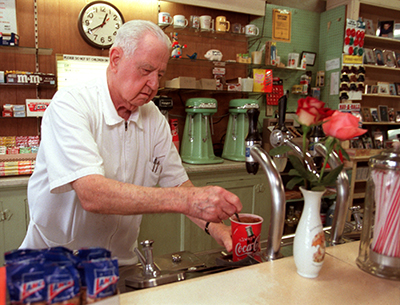 Seward, Chris. "John Mcdonald."  Photograph. 1999. To request permission for further use or to purchase a print, please contact the News & Observer.