Harry Kittner: A Candle Is Lit

Harry Kittner is one of the last congregants at Temple Emanu-El, in the small town of Weldon. This synagogue was the heart of a Jewish community that once thrived in Eastern North Carolina but has almost disappeared.

Formerly a bustling market town, Weldon has faded in recent decades. Kittner's Store, a downtown institution for 83 years, closed recently, when Kittner and his brother Bill retired. And Temple Emanu-El is down to only a few members.

A kind, soft-spoken man, Kittner served in the Marines during World War II and has been a dedicated civic leader in Weldon ever since. His is the story of a Jewish community's devotion to a small town, its struggle to overcome religious isolation and its hopes to be remembered. 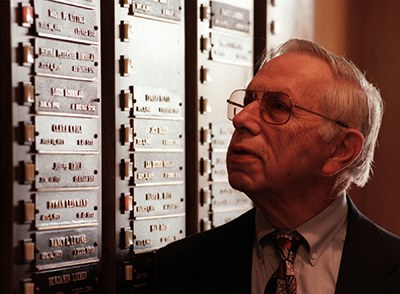 Seward, Chris. "Harry Kittner."  Photograph. 1999. To request permission for further use or to purchase a print, please contact the News & Observer.