As a boy in Kinston, Halie Kelley delivered telegrams to what was one of the most notorious red light districts in America, Sugar Hill. Folks used to say it was the wildest place between New Orleans and New York. Most every gentleman of a certain age in Eastern North Carolina remembers Sugar Hill -- only by reputation, of course. It was as much a part of tobacco farming life as market week or the annual visit from Rusty Williams' Tent Show with its theater and games of chance.

Supposedly founded by Civil War refugees, Sugar Hill lured farmers from all over Eastern North Carolina, city people on the way to the fishing beaches, and servicemen from Camp Lejeune and Fort Bragg. Military leaders finally shut it down during World War II.

I had problems finding anybody willing to talk on the record about this storied icon of Eastern North Carolina's past. But when I visited Kelley at his home near Pink Hill, the retired tobacco farmer told me right off, "I'm 88 years old and I don't care what anybody thinks about me." He wasn't kidding.

I relished the way Kelley spoke his mind. Best of all, I liked how he hadn't forgotten the women who worked in Sugar Hill or the hardships that made even Sugar Hill seem like a refuge for some of them. 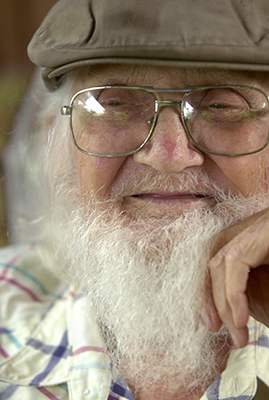 Seward, Chris. "Halie Kelley."  Photograph. 2001. To request permission for further use or to purchase a print, please contact the News & Observer.