I visited with Joe Johnson a couple of blocks from the abandoned textile mill that was the town of Erwin's lifeblood. For nearly a century, Erwin Mills made denim cloth, and the town proudly called itself "the denim capital of the world." Joe worked in the mill from 1943 until his retirement in 1986.

The closing of Erwin Mills last year signaled the passing of an age, and not just in Erwin and Harnett County. Textiles remains the state's largest manufacturing industry, but textile employment has declined by almost half in the last 30 years. Boarded-up textile mills and empty cotton warehouses are an enduring part of our landscape now.

Joe and I talked at a wonderful museum that he and other Erwin Mills veterans have launched next to the public library downtown. The museum highlights Erwin's mill village heritage. And this past year, despite the mill's closing, Erwin still celebrated "Denim Days, " its largest festival. Joe says the Chamber of Commerce hasn't decided yet whether to rename the festival in the future, but no matter what, you're all welcome. 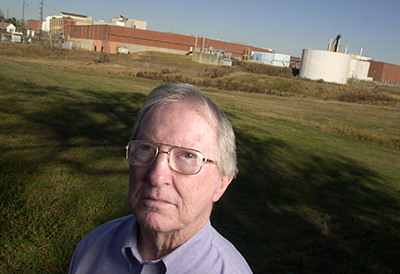 Seward, Chris. "Joe Johnson."  Photograph. 2001. To request permission for further use or to purchase a print, please contact the News & Observer.