Denise Giles: Places In The Heart A Hometown Hero

Denise Giles has come a long way since the days when she was homeless in Fayetteville and peddling her own blood to buy groceries. Getting off the streets and out of 18 years of alcoholism, she eventually earned her college degree. Now she is director of Cumberland Inter-Faith Hospitality Network, a church coalition that provides shelter and other help for homeless families.

I talked with Giles at her office at Ashton Woods, a Fayetteville housing complex that is being developed for homeless families who need a transitional place between the streets and a home of their own.

She laughed and cried often during our interview. Behind her laughter and tears, I heard a wisdom and compassion far beyond her 39 years.

She began her story when she was a little girl growing up in Fayetteville during the Vietnam War. 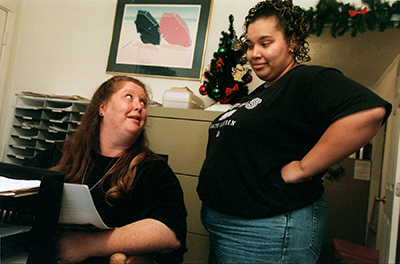 With a new home, Denise began to search for help out of her alcoholism. She briefly joined a storefront church near her favorite bar. Later, she joined a religious cult that was recruiting in Fayetteville's bars, but she withdrew as soon as she realized it had an anti-Semitic and paramilitary background.
Another night, she found herself in an African-American church whose members embraced her and made her realize how much she needed that sort of unconditional love. She didn't return to the church, but she still considers it a turning point in her recovery.

In 1991, a friend had Denise committed involuntarily to a local hospital while she was blacked out. It was the beginning of a long process of rehabilitation that involved her friends, family and some very committed alcoholism treatment staff at her local mental health center. For the first time since she was a little girl, she was ready to accept their help.
Eventually, Denise enrolled in Fayetteville State University, where she found professors who also believed in her. She graduated in 1995.

I asked Denise how homelessness had changed between her own days on the street and what she sees now as director of the Cumberland Inter-Faith Hospitality Network.

This extended oral history, compiled by historian David Cecelski, who contributes "Listening to History" each month in Sunday Journal, is an excerpt from the "Listening for A Change" project of the Southern Oral History Program at the University of North Carolina at Chapel Hill.

Stoneman, Sher. "Denise Giles."  Photograph. 1999. To request permission for further use or to purchase a print, please contact the News & Observer.