Kenneth George may be only 30 years old, but he has 10 generations of pottery making behind him. He and his grandmother operate the famous Cole's Pottery in Sanford. The first Cole potter moved to North Carolina from Staffordshire, England, in the 1750s. The Coles settled by the rich clay beds of Seagrove, 75 miles west of Raleigh, and have been turning and firing pots ever since. They helped make the Piedmont into one of America's centers for traditional, handmade pottery.

A no-nonsense craftsman with a wry sense of humor, George is a rather understated heir to the state's first family of handmade pottery. "I just hope we stay busy," he told me when I asked about his aspirations for the shop's future.

We talked while George turned pots. I stood, transfixed, as he worked the air out of a piece of clay, as if he was kneading bread. Then he turned that clump of earth into a pitcher that shone brilliantly with a rough-hewn grace and simple elegance. Like all Cole pottery, his work renewed my faith that the plain truly can be exalted, the most ordinary parts of life made beautiful. 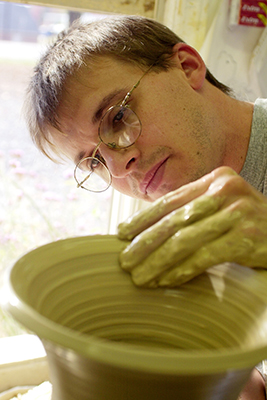 George showed me the pug mill where he grinds clay, mixing it and screening out sticks and roots.

We walked past great pails of glaze colors, hundreds of drying pots, and kilns that fire his pots to 2,200 degrees.

I asked him how he became a potter.

Seward, Chris. "Kenneth George."  Photograph. 2000. To request permission for further use or to purchase a print, please contact the News & Observer.