The Cherry Point Marine Corps Air Station opened near the remote crossroads of Havelock in 1942. Originally known as Cunningham Field, it included a vast industrial complex where civilian tradesmen maintained and repaired warplanes. With the local boys overseas during World War II, Cherry Point relied on women from all over Eastern North Carolina for its work force.

Georgia Rae Dickinson worked at Cherry Point from 1943 to 1945. She commuted from Morehead City, where she also volunteered at the local USO. I liked her the minute I met her. When she was telling stories about Cherry Point and the USO, she made me laugh 'til it hurt one moment, then moved me to tears the next. She laughed loud and often, and I could hear more than a trace of a fine brogue that she inherited from grandparents who grew up on Shackleford Banks.

The experience of working in skilled industrial trades alongside Marines transformed these women's lives. "It was an exhilaration, a boost, a thing that makes you feel like you can do anything, " Dickinson told me. "It was something you don't do every day." 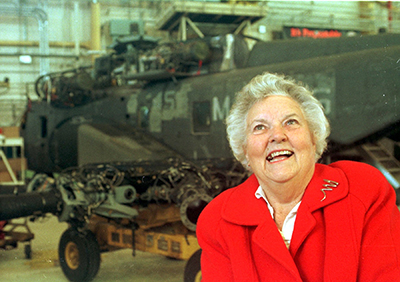 David Cecelski is an historian at the Southern Oral History Program at the University of North Carolina at Chapel Hill.

Seward, Chris. "Georgia Rae Dickinson."  Photograph. 1999. To request permission for further use or to purchase a print, please contact the News & Observer.