Emma Crawford was born 106 years ago on a small farm in Alamance County. We talked at her home in the historic Oakwood neighborhood of Raleigh, where she has lived since 1922.

Listening to her, I felt almost dazed at how much has changed in one woman's lifetime. I couldn't get used to the fact that she was born the year that Thomas Edison patented his motion-picture camera, that she was 11 when the Wright brothers made their first flight, that she was a grown woman when the Titanic sank.

When Crawford was born, North Carolina was a land of small farms and mill villages. Only 1 out of 10 citizens lived in towns or cities. No women and few blacks had the right to vote. Typhoid and scarlet fever remained every mother's nightmare. Organized in the Populist Party, many farmers still believed that they could challenge the power of railroads and big business.

Mrs. Crawford weathered the 20th century with a steadfast faith and charitable spirit that also seem to belong to another age. She still keeps busy, too. She reads the newspaper every morning, crochets and enjoys helping out with the housework. She also stays in touch with many of her Sunday school students at Edenton Street United Methodist Church, where she taught the 2-year-old class for 65 years.

"You can't believe how good they've all been, " she told me.

A historical note: When Mrs. Crawford mentions a flu epidemic, she is referring to the Spanish influenza epidemic of 1918. That virulent flu strain killed 500,000 people in the United States, 21 million worldwide. 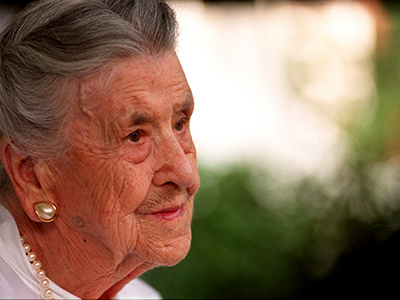 Seward, Chris. "Emma Crawford."  Photograph. 1999. To request permission for further use or to purchase a print, please contact the News & Observer.