Linen, woven from fibers obtained from the flax plant, was an important fabric in many 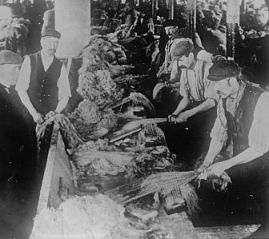 European areas, especially in the northern Irish province of Ulster. Flax and linen products were initially brought to America by immigrants from these and other regions. While pure linen cloth was preferred for home furnishings, linen warp threads had been joined with woolen weft threads since the Middle Ages, resulting in a mixed fabric known as "linsey-woolsey." In the late eighteenth century, linen faced increasing competition from 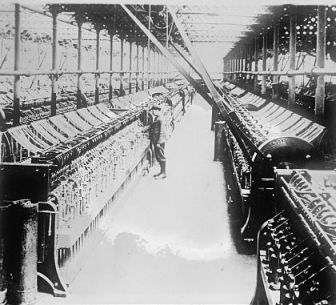 cotton, which was easier to weave, more comfortable to wear, and more profitable for those wishing to sell cloth. Cotton provided another option for spinners, and the term "linsey-woolsey" expanded to include cotton and linen mixtures. Cotton's popularity caused flax production to decline dramatically in the United States in the nineteenth century. North Carolina, the fifth-largest producer of flax in 1850 with 593,796 pounds, dropped to sixth place in 1860 with a crop that had plummeted to 216,490 pounds. By 1880 North Carolina produced only 9,621 pounds of flax. Changing consumer preferences removed linen from its common place in everyday clothing, relegating it to expensive home furnishings brought out for special occasions.