The Lightner Arcade and Hotel, Raleigh

The early 1930s was the time of the Great Depression, segregation, big bands, and swing. During that decade, Raleigh's East Hargett Street was the economic and social hub for the area's African American community. And the Lightner Arcade and Hotel was at the center. 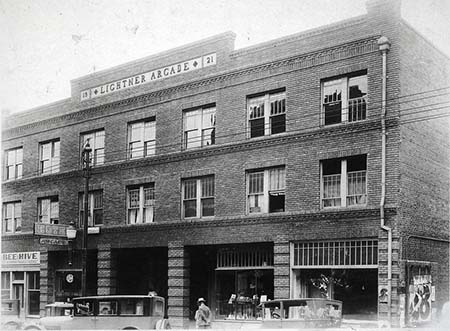 The arcade and hotel were located at 122 East Hargett Street. The building provided a home for medical offices, lawyers, a pharmacy, music and dancing, The Carolinian newspaper, and a hotel for Black visitors and travelers. The story goes that Calvin Esau Lightner, a mortician and architect, established the arcade and hotel because his wife became tired of friends staying at their home. Beneath this anecdote is the serious side of the building's history: for decades Black travelers faced the extremes of discrimination and racism with threats to safety in commerce and travel. Many hotels and tourist homes would not serve Black customers. And in some places, Black travelers faced threats and violence in trying to secure services and accommodations. The Lightner was a place where Black people could safely do something as seemingly simple and yet critical as use a restroom.

The Lightener Arcade and Hotel is believed to be the first Black hotel in North Carolina. The building’s multi-purpose character made the Lightner the social and cultural center of Black society for Raleigh and the surrounding area. The Lightner's third-floor ballroom was also the place where big band musicians performed. Big names such as Duke Ellington, Count Basie, Cab Calloway, and Edward Kennedy played there. The arcade and hotel’s vibrant life added to East Hargett’s reputation as the “Black Main Street”. Many Black businesses were located on the street, including the Royal Theater and the Richard B. Harrison Library, Raleigh’s first Black library. For many years, the Royal Theater was the only theater in Raleigh that provided full service to Black customers.

Calvin Lightner designed and built the Lightner Arcade and Hotel building with his brother, Rayford Hanahan Lightner, in 1921. Its design was typical of commercial buildings of the time. Constructed of brick, the building housed a ballroom, hotel, and meeting rooms on the upper floors. The first-floor opened onto the sidewalk of Hargett Street and housed businesses, doctors, and lawyers.

The building was sold by the Lightner family for $108,000 in May of 1925 to the Household of Ruth, a female auxiliary of the Grand Order of Odd Fellows. In the late 1940s, the N.C. Homemakers Association acquired the hotel and arcade and renamed it the Home Eckers Hotel and operated a trade school for African American women. In the 1960s, the building became the Peebles Hotel, operated until it was destroyed by fire in 1970. Today, Raleigh’s central municipal bus depot sits where the hotel and arcade once stood.