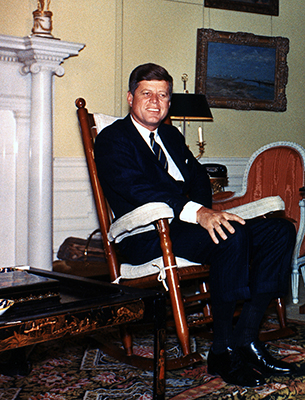 The Kennedy Rocker, formerly called the Carolina Rocker, originated from the P & P Chair Company in Asheboro, North Carolina. P & P, founded in 1926 by World War I buddies W.C. Page and Arthur E. Presnell, had been initially successful, but struggled in the lean years of the Great Depression and again in the 1950’s. Page considered closing the company, until an unusual turn of events brought them to the forefront of the American media.

New York back pain specialist Dr. Janet Travell took an interest in one of P & P’s rocking chair products in 1953, then called simply ‘Style number 1,000.’ Travell believed that a properly proportioned rocking chair could relieve tension in the lower back by allowing muscles to relax and contract while sitting. Travell tested P & P’s rocker and liked it so much that she purchased several more for her office and waiting room, dubbing the chair the ‘Carolina Rocker.’

In 1955 Senator John F. Kennedy, who suffered from lingering back problems due to a war injury, sat in one of the rockers in Dr. Travell’s waiting room. Kennedy immediately loved the chair and requested to purchase it from the doctor. She instead gave him the contact information for the P & P Chair Company. Kennedy contacted the company about the rocker and insisted on paying full price, even though the company offered him the chair for free.

When Kennedy became president, the Carolina rocker was the only piece of furniture he brought to the White House form his senate office. President Kennedy was noted throughout his presidency for his love of the chair. He bought 11 additional rockers for Camp David, his Kennedy estates in Florida and Massachusetts, and even several hotels he frequented. He gave dozens of rockers as gifts for friends and heads of state. The chair even accompanied him in his travels on Air Force One.

As word of the favored chair spread, Dr. Travell released the manufacturing company’s name to the public, and soon the business began receiving 400 to 500 calls per day. CBS, Life Magazine, Time, Newsweek, and Popular Science all did features on the rocker. At the height of the fervor, P & P was handcrafting 250 Carolina Rockers a day. Eventually the fame was so great that the Carolina Rocker became known as the Kennedy Rocker, which it is still called to this day. One of Kennedy’s own personal Kennedy Rockers recently sold at a Southesby’s auction for $442,500.

The original design of the Kennedy rocker emphasized function. It was set low with wide armrests and a firm seat & back. The chair was shaped, steam-bent and assembled while green, creating back post curves that give support to the back while carrying body weight down to the floor. Modern Kennedy rockers have backs woven from Malaysian rattan. The company registers each original presidential rock with a trademark stamped underneath the chair’s arm, as well as with an identifying tag.