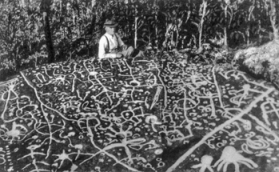 Judaculla Rock, associated with the Cherokee legend of Tsu'kalu, is a large soapstone rock covered with petroglyphs located on Caney Fork Creek off N.C. 107 in Jackson County. According to legend, Judaculla was a great slant-eyed giant who courted and wed his wife at the Cherokee town of Kanuga on the west fork of the Pigeon River near the Bethel School in Haywood County. The newlyweds returned to his residence (Judaculla Old Fields) on a mountaintop, where he had cleared about 100 acres for farming. The carvings on Judaculla Rock are said to be scratches left by the giant when he jumped from his farm on the mountaintop to the valley below. Some people believe the markings may represent a picture map of the Battle of Taliwa, which was fought between Creeks and Cherokees in 1755. The Creeks lost the battle, which took place near present-day Canton, Ga., and were driven from their settlements in north Georgia.