So Much More than Space Jam

Think about the shoes you’ve seen others wear. Have you ever seen someone wearing Air Jordans? If so, you might know that they get their name from Michael Jordan. He is a legendary basketball player. But did you know that Michael Jordan is a famous person in North Carolina history? Take a look at this article to learn more about the famous “M.J.” and his contributions to sports history! 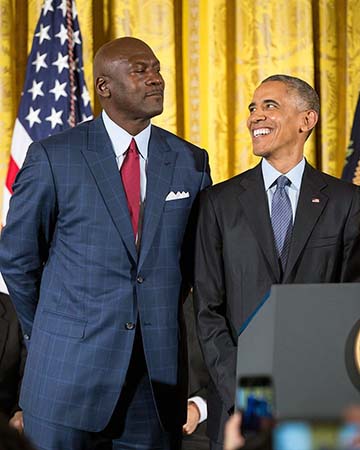 After college, Michael Jordan began playing professional basketball. The Chicago Bulls drafted him in the 1984 NBA Draft. He won the NBA Rookie of the Year award during his first season and helped his team make it to the NBA play-offs. He also helped the Chicago Bulls win their first ever NBA Finals, which they later won many times.

Michael Jordan also played basketball in the Olympics in 1984 and 1992. In 1992, the Olympic basketball team from the United States was called the “Dream Team.” Michael Jordan continued playing for the Chicago Bulls until 1993. He decided to take a break and play baseball. He returned to play basketball again in 1999 for the Washington Wizards until he retired in 2003. He has won many awards for playing basketball, including Most Valuable Player (MVP).

Michael Jordan became a basketball superstar. He used to wag his tongue and jump very high when playing the game. His slam dunks helped him earn the name “Air Jordan.” This name was given to his line of shoes that came out in 1984 and are still produced today. Michael Jordan even wore his old UNC shorts under his Chicago Bulls shorts. This started a trend for basketball players to wear long, baggy shorts. Michael Jordan also starred in the movie Space Jam in 1996. In this movie, he played basketball with Bugs Bunny and the Looney Tunes characters.

In 2016, Michael Jordan received one of the greatest honors an American can receive -- the Presidential Medal of Freedom. He received it from President Barack Obama.

How can you be a better team player in your life?