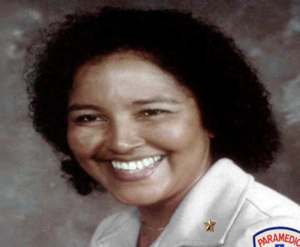 Janie Settles was the the first African-American female rescue chief in North Carolina. She was born and grew up in Littleton in Halifax County, the youngest of the fourteen children of John Wesley Settles and Jannie Harlin Settles. At age 17, Janie married Herman Johnson, also of Littleton. They moved to Roanoke Rapids, North Carolina, in 1949, where they raised their two children (Phyllis and Carlton Johnson) and were members of the Piney Grove Baptist Church in Roanoke Rapids, North Carolina.

Johnson worked in the textile industry as a loom operator for most of the 1950s and early 1960s. As the civil rights movement took hold in the South during that time, she became involved in improving employee rights and working conditions for African Americans in the textile factories in Halifax County.

In the mid-1970s Johnson and her husband moved to Topsail Island in Onslow County where she started a career in public safety. Topsail Island then had no organized fire or rescue department and Johnson felt one was sorely needed as the island’s population grew. She worked with town and county leaders during the late 1970s to build a case based on population, tourism, and growth to establish a dedicated 24/7 fire/rescue department. Finally in 1982 the Town of West Onslow Beach (now North Topsail Beach), in conjunction with Onslow County Emergency Management, established the department and in 1984 Johnson became rescue chief of the West Onslow Beach Fire and Rescue Department and consequently the first African American female rescue chief in North Carolina. During that same year, she received an Associate Degree in Medical Science from Coastal Carolina Community College in Jacksonville, North Carolina and served as a chief of paramedic services for the department. This was a dream fulfilled as she dedicated much her life to helping others. 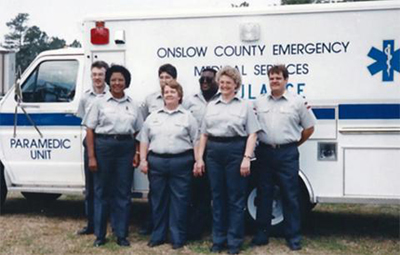 Johnson was suceeded by David Harris in 1986 and retired from Onslow County Emergency Management Services in 1994, but remained active in the Topsail Island community until 2005 when she moved to back to Littleton.

In her later years, Johnson spent much of her time attending church and maintaining a half-acre botanical garden at her home. She occasionly returned to Topsail and maintainted a beach home there. She remained very active with the Littleton community and volunteered at a local women’s mission organization, sang in the choir, and participated in many other outreach activities.

In September 2010 Janie was diagnosed with mesothelioma, possibly the result of exposure to asbestos fibers during her years working in the textile factories in Roanoke Rapids. Janie died from complications associated with mesothelioma on May 6, 2012 at the age of 80.

Correction needed: First female African American West Onslow Beach RESCUE Chief! 1984 to 1989 Yes, She was great asset to the squad. I Thomas D Best, Jr have been Fire Chief with the Town of North Topsail Beach since June 1, 1990. Town of North Topsail Beach Incorporated on Jan.16, 1990 Before that 1987 to 1990 I was the Asst. Fire Chief and David Harris was the Fire Chief of the West Onslow Beach VFD. Yes Rescue started in 1984 before the fire station was built in 1986 . Please Make correction

Thank you for taking the time to post this information! We've made the corrections to the entry; please let us know if you see additional changes that need to be made.