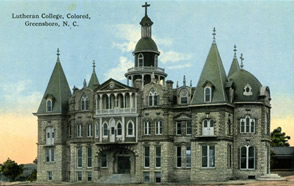 Immanuel College in Greensboro was a residential high school, junior college, and theological seminary for African Americans operated by the Missouri Synod of the Lutheran Church from 1903 to 1961. Initially located in Concord, the college relocated in 1905 to a 13-acre campus in Greensboro at the corner of East Market and Luther Streets, two blocks from Grace Lutheran Church. Immanuel College trained scores of African American teachers, and the theological department trained most of the African American Lutheran clergymen ordained in the South before the 1960s.

A product of the Jim Crow period of segregation during the first half of the twentieth century, Immanuel College became an early victim of the movement toward school desegregation when the Lutheran Synodical Conference, meeting in 1961 in Milwaukee, abruptly decided to close the school and concentrate denominational resources in Concordia Academy and College in Selma, Ala. Among the college's best-known alumni are James Cheek, former president of Howard University; S. R. McClendon, principal of Florence Elementary School in Guilford County; Jim Wright, director of the Greensboro Human Relations Commission; and Gregg Morris, a television actor who appeared in the show Mission Impossible from 1966 to 1973.

Rosa Young, Light in the Dark Belt: The Story of Rosa Young as Told by Herself (1950).