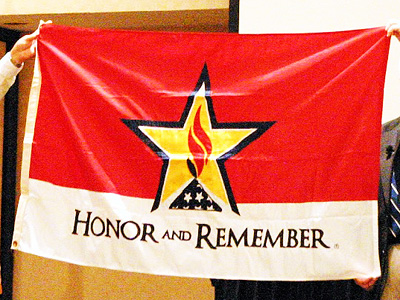 On August 4, 2010, the North Carolina General Assembly designated the Honor and Remember Flag as a symbol to recognize members of the Armed Forces of the United States who died while serving their country (Session Law 2010-145). At that time, it was the fifth state to do so. As of 2012, there are 13 states that have recognized the Honor and Remember Flag, including Virginia and South Carolina.

The flag was created by George Lutz after the death of his son Tony in Iraq in 2005 while serving in the U.S. Army. The flag was unveiled on Memorial Day, 2008 by the nonprofit organization Honor and Remember, Inc. The organization works to have the flag adopted as a symbol by all 50 states. It presents personalized flags to the families of fallen service members with the name of the deceased and the place and date of death.