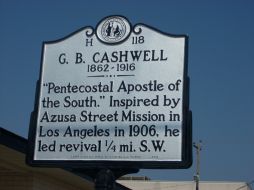 The Holiness Church in North Carolina was an outgrowth of the Holiness movement within the Methodist Church and the Methodist-related National Camp Meeting Association for the Promotion of Holiness (1867). These two movements, inspired by the works of John Welsey, Adam Clarke, and John Fletcher, sought to encourage not just initial salvation but a second conversion, or "second blessing," known as "entire" or "full" sanctification.

The Holiness Church of North Carolina, as distinguished from a church of the same name in California, was formed from the Methodist Episcopal Church, South, by one of its ministers, Ambrose B. Crumpler (1863-1952). Crumpler, after being inspired in 1889 by Holiness evangelist Beverly Carradine, accepted entire sanctification in his life and became a Holiness evangelist. In 1897 he formed a Holiness association and began conducting revivals that attacked materialism, ornamentation, the use of tobacco and alcohol, and Methodist Church bishops. Two years later, he left the Methodist Episcopal Church to establish the Holiness Church at Goldsboro. He published a denominational newsletter at Fayetteville and served as president of the church for nine years (1900-1909).

One of Crumpler's followers, Gaston B. Cashwell (1826-1916), soon carried Holiness one step further. Cashwell, who left Crumpler's church in 1906 for the new Pentecostal movement, began a series of Pentecostal revivals in eastern North Carolina. Cashwell preached on the imminent second coming of Christ, on faith healing, and on how speaking in tongues was a sign of the "third blessing" in individuals. Wesleyan, Baptist, Presbyterian, and Congregational churches joined Cashwell, and the Holiness Church, in spite of Crumpler's vehement opposition, deserted its founder to become part of the newly formed Pentecostal Holiness Church (1911).

Melvin E. Dieter, The Holiness Revival of the Nineteenth Century (1980).

Charles E. Jones, A Guide to the Study of the Holiness Movement (1974).