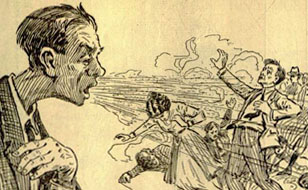 From the Spring of 1918 through early 1919, as nations experienced the upheaval of World War One, an influenza pandemic ran through North Carolina. In April 1919, Dr. William Rankin, the Secretary of the State Board of Health and a noted proponent of health education, reported the death of over 13,600 North Carolinians from influenza, and estimated that approximately 1,000,000 of North Carolina's 2.5 million inhabitants had caught the disease. Nationally, the disease killed around 700,000, and some estimates suggest anywhere from 50 to 100 million died worldwide.

Known alternately as "the grippe," the "Spanish flu," and the "Spanish lady," the influenza A strain from this pandemic was particularly virulent, hitting the United States in multiple waves. There were a number of complicating factors that influenced the spread of the epidemic. Coming as it did during the height of the United States' involvement in World War One, such measures as the state took to combat the flu were often overshadowed by the patriotic fervor accompanying the war. In addition, the cause of the disease was unknown, and many hesitated even diagnosing it as influenza. Other diseases, like typhoid fever and tuberculosis, were affecting the state at the same time. North Carolina, along with the rest of the nation, was slow to respond with basic measures like temporary hospitals and quarantine areas and relied on volunteers to treat the sick.

The pandemic appears to have struck earliest in Wilmington (Cockrell 311). Thereafter, information from military camps across the state documents the rise and fall of flu. Camps within North Carolina (Greene, Polk, Bragg) as well as those in South Carolina (Sevier, Jackson), to which many North Carolinians were sent for basic training, supplied statistics to the United States Public Health Service, which were compiled in weekly Public Health Reports. Also included in the reports were articles on treatment, court cases, analyses, and telegraphic reports from other countries.

As the pandemic subsided, new hospitals were built around the state to make up for the lack of facilities during the pandemic. The government and those in the medical field recognized and promoted the importance of health education, both for the general public and health professionals. The staggering death toll and the degree to which the medical community struggled to deal with the virulent disease ended up being a "modernizing factor on the state's social health services" (Cockrell 311).

The deadly virus: The influenza epidemic of 1918. National Archives and Records Administration. https://www.archives.gov/exhibits/influenza-epidemic/

North Carolina and the "Blue Death": The flu epidemic of 1918. LearnNC. https://www.ncpedia.org/anchor/north-carolina-and-blue