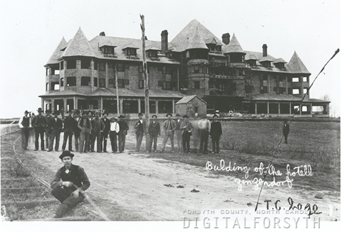 In 1890 the North Carolina Piedmont town of Winston had become as modern as anyone would want it to be. Its residents enjoyed electric streetlights, paved streets, railroad service, telephones, and streetcars.

Many Americans were thinking big in the Gilded Age—an era of relative prosperity and rapid advances in technology. A group of leading citizens in Winston decided to turn a part of town called the West End into a fine resort community. The focal point would be a lavish, or fancy, hotel built atop a knoll at the head of Fourth Street. The hotel would have elevators, electric lights, and hot and cold water in public and private baths on every floor. Rich people from all over the world would come to stay, the planners thought.

The group planning the resort community included tobacco king R. J. Reynolds, a wealthy and progressive businessman whose family played a big part in the development of Winston and its neighboring town of Salem. Winston and Salem were then called the Twin Cities. Reynolds and the others knew that a fancy hotel in Winston would bring fame and fortune to Salem, too. They decided to name the hotel after Count Nicolaus Ludwig von Zinzendorf, the leader of the Moravian colonists who had originally laid out the town of Salem.

Historical sources disagree on the Hotel Zinzendorf’s opening date, but it was probably completed sometime in 1891. The hotel stood four stories high and as long as a football field. Ten towers of different sizes and shapes made it look like a castle. Hardwood furnishings added to the elegant feeling. Through hotel windows, guests gazed out over a huge forest and enjoyed a panoramic view of distant mountains. In the evenings, they waltzed to the music of a twelve-piece orchestra in the ballroom.

On Thanksgiving Day 1892, the Hotel Zinzendorf's chefs rose early to prepare a splendid feast. Reynolds and several other hunters went into the forest and shot wild turkeys and quail to complement delicious side dishes made by the staff.

By 11:00 a.m. the aromas of fresh-baked bread and roasted turkey with all the trimmings filled the halls. Hotel guests gathered outside the dining room, expecting someone to announce, "Dinner is served." Instead, they heard a shout from the laundry room: "Fire! Fire!" 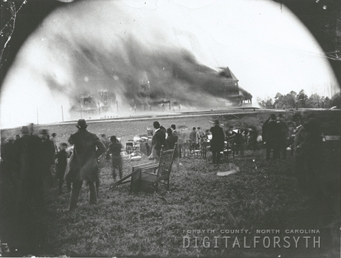 Flames shot out from the rear of the grand hotel. People grabbed furniture, fixtures, and personal possessions as they ran out the doors. Cadets from Davis School plunged into the burning building to rescue guests and property. With its wooden frame and cedar shingles, the Hotel Zinzendorf stood no chance against the hungry fire. Neither did the two firefighting companies called to subdue the blaze. "With wonderful rapidity, the flames sped on with wild, fantastic leaps," a newspaper reported. "One miniature cyclone after another swirled out of the mass . . . hurtling viciously across the lawn."

No one was seriously hurt, but by one o’clock that afternoon the hotel lay in ruins. Onlookers and firemen organized an impromptu Thanksgiving Day "picnic on the grounds," sharing food salvaged from the disaster. The feast did not include the turkey and quail bagged by Reynolds and the other hunters. "They were cooked all right," said one man, "but never served."

Winston’s dreams of becoming a famous resort town went up in smoke that day. The exact cause of the fire was never determined. Insurance covered part of the loss, but no one seemed willing or able to rebuild the Hotel Zinzendorf in its glory. One reason: in 1893 the United States entered a serious economic depression. The Gilded Age had ended.

Wow! Who knew?!? Well, not I. A friend posted a picture on Facebook which made me research the hotel and I came across this entry. Amazing the things we don't know about our own area!! Sounds like perhaps they were attempting to compete with Mr. Vanderbilt in Asheville (wink wink).