Like the rest of the United States, North Carolina experienced great social and industrial transitions throughout the twentieth century. Punctuated by international events like two World Wars and more local concerns like the rise and plateau of tobacco as a driving force in the state's economy, North Carolina's history in this recently closed century is still being examined from numerous perspectives. This article gives only a very few highlights and general trends. 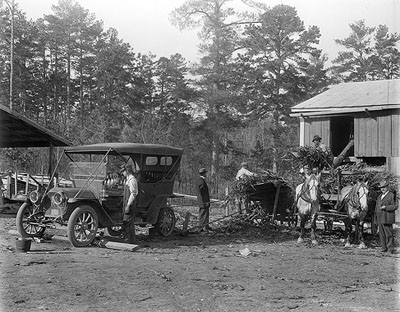 The first part of the twentieth century saw a heavy investment in infrastructure that lasted well into the 1940s and 50s. These infrastructure changes helped people get to where they needed to go, and to have electricity when they got there. As more and more individual families owned automobiles, the way people traveled and thought about travel throughout the state and beyond changed dramatically. To keep up, North Carolina established a state highway commission in 1915, championed rural road paving, and took over road maintenance from counties to ensure safer and more uniform driving conditions. Other sweeping changes expanding the state's infrastructure include the rural electrification movement and the widespread damming of rivers to create hydroelectric facilities.

From the late nineteenth century through the early 1920s, people throughout the nation sought reform of social, work, and general living conditions for women, immigrants, and the poor in what has come to be known as the "progressive era." Mill and tobacco workers would strike to gain fair treatment and wages, especially throughout the first half of the century. With a focus on changing quality of life in different ways came an additional emphasis on public health, including the formation of the North Carolina Public Health Association, an increased number of state-wide public health campaigns, and a growth in the number of regional hospitals. At the same time, other types of "reform," such as the prohibition of alcohol (introduced in North Carolina in 1908), became passionate crusades for many. Alcohol prohibition, which was repealed in 1933, still has a few disparate legacies including blue laws restricting the sale of alcohol on Sunday and NASCAR.

North Carolina experienced a marked shift in the twentieth century in the forces underlying its major agricultural and industrial strengths. Textiles, tobacco, and furniture were the strong underpinnings of early 20th centry agriculture, manufacturing, and trade. To give one example, the growth and production of tobacco and tobacco-related products began back with early European settlers in the latter part of the 17th century and had firmly established itself as a major economic driver supported by the labor of enslaved people throughout the 19th century. Health concerns regarding tobacco use and litigation like the Tobacco Master Settlement Agreement of 1998 have tempered the growth of the tobacco industry through the latter part of the twentieth century through the present.

With these changes, the state's population has shifted from rural, farm-based family units to urban life centered around the state's most populous cities (Charlotte, Raleigh, and Greensboro). Strong agricultural industries now include swine, poultry, and viticulture. Although still very present in the state today, industries like tobacco and furniture also now compete heavily with North Carolina's knowledge-based enterprises, driven by research in world-renown institutions of higher education and corporations in areas like Research Triangle Park and Charlotte.

Throughout the 1900s, North Carolina continued to negotiate its long history of racial and social inequality. Segregation of African Americans in public establishments and schools was the accepted and legal norm throughout the state. In 1956, the General Assembly countered the Supreme Court ruling of Brown v. the Board of Education of Topeka, Kansas by allowing North Carolina students to attend private schools instead of desegregating. Sit-ins, protests, and even riots by both African Americans and whites continued throughout the 1960s until schools were finally required to desegregate by the federal government in 1971.

As part of the eugenics movement in early 20th century America, many states enacted laws that allowed sterilization of the "mentally diseased, feeble minded or epileptic." North Carolina's first sterilization law was enacted in 1929, and what followed were years and years of sterilization of over 7600 people, primarily African Americans and the poor. The Eugenics Board, created by the General Assembly in 1933 and only abolished in 1977, decided on cases long after many other states had ceased such operations.

North Carolina in the twentieth century grew not only in population size but in diversity. Even as African Americans gained greater equality, the rise in the Hispanic population has led to debates on immigration reform and a broadening of public services to Spanish speaking individuals. 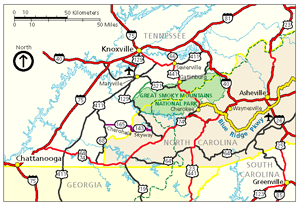 Driving tourism and the sustainibility of natural habitats, North Carolina's national parks, state parks, and other protected wildlife areas represent a large portion of the state. The development of these areas flourished in the twentieth century, with major milestones including the designation of Mount Mitchell as the first state park in 1915, of Lake Mattamuskeet as a National Wildlife Refuge in 1934, and the completion of the dedication of the Great Smoky Mountains National Park (which extends into North Carolina) in 1939. In 1916, Pisgah National Forest, became one of the first national forests located in the eastern United States. At the end of the 20th century, despite encroachment, 58% of North Carolina was still forested.