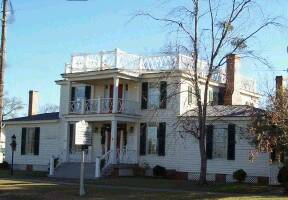 Harmony Hall, a restored late eighteenth-century house on King Street in Kinston, was known for 120 years as the Peebles House. Efforts to save and preserve the structure in the mid-1960s resulted in a change of its name to Harmony Hall, the reasons for which remain unclear. The name has no historical association with the house; none of its occupants referred to the house as Harmony Hall; and, considering the history of those who have lived there, the name seems ironic.

Simon Bright III built the dwelling in the early 1790s. Bright was a one-term state senator and clerk of the Lenoir County Court of Common Pleas and Quarter Sessions. After suffering a mental breakdown in 1799, he shot and killed an enslaved woman on King Street. Bright was deluded and believed that black people were stealing all his turkeys. Convicted of murder, he was placed under house arrest instead of jailed. He died in his home shortly after 1800 while appeal of his conviction was pending in the courts.

Jesse Cobb bought the house, and after his death, his widow Elizabeth Heritage Cobb lived there until her death in 1820. Her heirs transferred the house and lot to Abner Pearce in 1824. Abner died at the age of 29, and his daughter Susan, who was born in the house, never reached her seventeenth birthday. Abner's widow, Phoebe, subsequently remarried, but her new husband died a few years later. Phoebe, in her early forties, passed away less than three months after her second husband. In 1846 John Henry Peebles bought the house at public auction. His family resided there for the next 75 years.

Eleven of John and Harriett Peebles's 13 children were born in their new home, but eight of them died before reaching three years of age. Of the other three, only one-a son named Henry-lived past the age of 45. As the Peeble family were enslavers, the abolition of slavery in the United States after the Civil War removed all capital the family owned in enslaved people and their labor. He grew despondent with his and the South's deteriorating military situation late in 1864. On 5 October of that year, in an upstairs back room, Peebles ended his despondency with a single gunshot.

With the loss of capital in enslaved people, Harriett Peebles took in boarders to support her financial situation, and only with the help of her Cobb relatives did she manage to keep the house. Her relationship with her only surviving child, Henry, became strained and eventually dissolved completely. She died in 1898 without reconciling with him. Henry married and lived in the home until the early 1920s, when he moved to Massachusetts, ending the long Peebles residency that gave the structure its name.

The Peebles House served as a private residence and rental property until the Kinston Woman's Club bought it to use as a clubhouse and public library. The library remained for 15 years, after which the Women's Club used the structure for special occasions. Preservation efforts began on the rapidly deteriorating house in 1966. Nearly 20 years passed before the house was restored and opened as Harmony Hall in 1984.

Jerry L. Cross, The Peebles House in Kinston: A Research Report for the Structure Restored as "Harmony Hall" (1990).