Originally published in "North Carolina Nursing History." Republished with permission. For personal educational use and not for further distribution. Please submit permission requests for other uses directly to the website creators.
https://nursinghistory.appstate.edu/

Madelon "Glory" Hancock:  The most decorated nurse in WWI 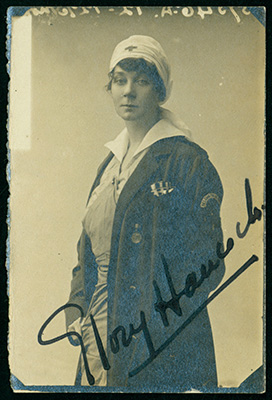 Born in Pennsacola, Florida in 1881, Madelon "Glory" Battle Hancock grew up in Asheville. Her father, Dr. S. Westray Battle, was a well known and highly regarded physician known primarily for his work with tuberculosis. After graduating from the Presbyterian Hospital School fo Nursing in New York City in 1905, she married Mortimer  Hancock, a British Army officer. When World War One broke out in 1914, Madelon joined the first British Hospital Unit going to the frontline of battle.

In the British Army she was known as "Glory Hancock," for her enthusiastic support of the Allied cause. She went to Antwerp, in Belgium, on Aug. 13, 1914, only a few days after the war began, with the first British Hospital Unit to serve in the war. She remained in that city until Oct. 12 of that year, when during a retreat by the Allies she brought in many wounded Belgians and British, the latter of the Royal Navy Division. She was then attached to the hospital established at Fermes, in Belgium, and nursed there through the first battle of the Yser, when the hospital was shelled by the Germans and had to be excavated. The patients were removed to Heogstadt, where she was during the first and second of Ypres and the second battle of the Marne.

She was at that and other dressing stations close behind the Allies' battle lines until the last moment of the war. She was never beyond the sounds of the guns and frequently within the zone of fire. She was gassed and was repeatedly in the midst of shrapnel fire, but she always escaped without serious injury.

For her services to the wounded and sick and her conspicuous bravery under fire upon various occasions, she received 12 decorations: five from Great Britain, five from Belgium and two from France.

After the War, Hancock returned to North Carolina to visit family members across the state. She died on September 30, 1930 in Nice, France. She had been divorced for several years at the time.

I wonder if she might be related to Kemp Battle who is a doctor in Asheville currently?

Could he be one of her descendants or at least a cousin?

She was very distantly

Read brief note about Madelon Hancock in The American Legion Magazine (Dec 2017) and would like to know if someone has written a book about this woman and her WW I adventures serving military medicine.

Thank you for visiting NCpedia and especially for taking time to share this resource and your question.

As far as we can tell, no one has written a book-length work specifically about Ms. Hancock.  Dr. Phoebitt Pollitt, professor of nursing at Appalachian State, has recently written a detailed volume on the history of professional nursing in North Carolina and devoted several pages to Hancock and other WWI nurses from North Carolina.  You may be interested in her book:

The url included in the citation goes to Worldcat where you can search to see if a library near you may have the book.

You may also be interested in this collection on Women Veterans at UNC-Greensboro. It includes a number of letters written by Glory Hancock: http://libcdm1.uncg.edu/cdm/search/collection/WVHP/

The University of North Carolina Libraries also has a manuscript collection for the Liddell and Pickens family which includes letters from Madelon Battle Hancock during WWI.  Here is the link to the collection: http://finding-aids.lib.unc.edu/03828/.

There have also been a number of books written about women and nurses in World War I and you might also use WorldCat to search for these.

I hope this helps. Please let us know if we can help further.