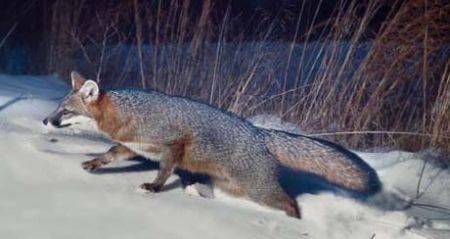 The primary foods are small mammals such as mice, rats and rabbits. They also feed on birds and insects occasionally. Native fruits such as persimmons and grapes as well as agricultural crops such as corn and peanuts are eaten more often by gray foxes than other fox species. 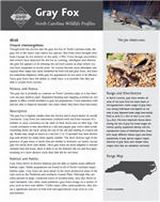 Gray foxes usually mate during their first year. Males probably mate with only one female each year and may mate with the same female in consecutive years in late February and early March.

Gestation period is 59 days. Litter size is from 3 to 5. Pups’ eyes open in 10 to 12 days. Pups are weaned after 10 weeks and they disperse from the family group in early fall. One litter per year. 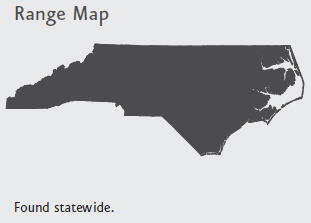 In North Carolina, gray foxes inhabit all areas of the state from the outer banks to the Appalachians. Home ranges of gray foxes vary among individuals and depend on the time of year. Reported home range sizes extend from 74 acres (0.1 mi2) to over 6,000 acres (9.4 mi2). The most important factors determining the size of gray fox home ranges are habitat quality, population density and the reproductive status of individual foxes. Areas with many different habitat types and dense populations of prey species support higher densities of gray foxes with smaller home ranges since they are somewhat territorial.

Though both the red fox and the gray fox live in North Carolina today, the gray fox is the state’s only native fox species. Red foxes were brought here from Europe by fox hunters in the early 1700s. Even though storytellers and writers have depicted the red fox as cunning, intelligent and shrewd, the gray fox appears to be winning the survival contest in areas where coyotes have expanded in recent years. As coyotes become more abundant and expand their range into areas inhabited by both red and gray foxes, red foxes are sometimes displaced, while gray fox populations do not seem to be affected. Since gray foxes have the ability to climb trees, it is possible that they are able to escape from coyotes.

The gray fox is probably as common in North Carolina today as it has been over the past million years. Regulated hunting and trapping activities do not appear to affect overall mortality in gray fox populations. Foxes reproduce well and are able to disperse annually into areas where they have been harvested. 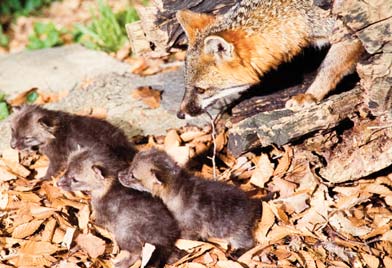 The gray fox is slightly smaller than the red fox and is much darker in overall coloration. Gray foxes are sometimes confused with red foxes because of a reddish or rusty coloration on the sides of their necks and on their legs. The overall coloration is best described as a salt and pepper gray with a dark streak extending down the back, along the top of the tail and ending in a black tail tip. Adults may weigh as much as a red fox (7 to 15 pounds) but their shorter legs and shorter fur make them appear smaller. The most obvious sign of the presence of gray foxes is tracks that are similar to domestic cat tracks, except gray fox tracks have claw marks. Since gray foxes are more adapted to warmer climates than red foxes, there is little or no fur between the toe and foot pads, resulting in a more distinct track than that left by red foxes.

Gray foxes thrive in diverse habitats and are able to exploit many different habitat types. Viable populations are found in all of North Carolina’s major habitat types. Gray foxes are most dense in the more productive areas of the state such as the Piedmont and northern Coastal Plain. Although they are often present in large, connected tracts of wooded areas, they also thrive in open farmland. Like other canid predators, gray foxes forage on a variety of prey such as mice and rabbits. Unlike many other canid predators, they also eat a significant amount of wild fruit and agricultural crops such as corn and peanuts.

Gray foxes are typically nocturnal although they will forage during daylight hours. Gray foxes mate once a year during January and February. Pups are born in March through April. Three to five pups are born in a den which may be only a hollow log or tree stump. It is suspected that the male adult stays with the female and assists her in bringing food to the pups until early fall when the pups reach adult size and disperse from the natal area. During the late fall and early winter gray foxes establish new home ranges.

The gray fox is economically important and considered a valuable natural resource by biologists and sportsmen alike. Gray fox fur became popular during the late 1970s for fur coats and collars and demand for their fur continues today, to some extent. Most conflicts that occur between people and gray foxes involve depredation on domestic poultry and concerns about diseases, such as rabies. Properly enclosed poultry in a secure pen and house, coupled with good husbandry practices, can prevent depredations. While gray foxes can contract rabies, interactions between people and gray foxes are rare. While the presence of gray foxes in a neighborhood is not cause for concern, people should still stay a respectful distance from gray foxes and all wildlife.

Gray foxes seen during the daytime are not necessarily diseased; they are responding to the presence of outdoor pet food and the concentration of small animals around bird feeders. Foxes are very vocal and people are most likely to hear a fox during the breeding season. Gray fox vocalizations range from mews and coos, to growls and snarls, to barks and screams. Foxes do not howl.

Most people are likely to see gray foxes killed by vehicles during the late fall and early winter when young foxes are dispersing from their natal home ranges into new areas and searching for mates. 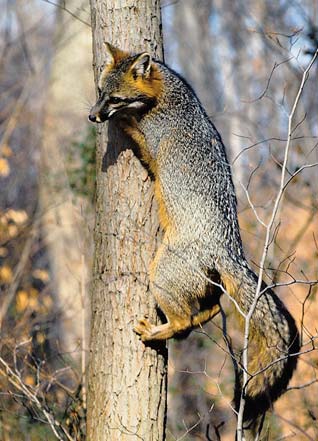 The presence of gray foxes in neighborhoods is not unusual. As with other wildlife, gray foxes are adapting to the changes in habitat that are occurring in North Carolina. They will eat fruit, vegetation, pet food, garbage, and small prey (i.e. squirrels, rabbits, mice, insects).

However, gray foxes can become habituated to humans if easy access to unnatural foods exists. To avoid conflicts, people should keep their yards and neighborhoods clean of unnatural food sources. While well-intentioned, people that feed feral cats will eventually attract gray foxes, as well as raccoons, opossums and skunks. Not only will this cause these wild animals to become habituated, but the concentration of wild animals will likely result in outbreaks of certain diseases, such as rabies or canine distemper. These diseases are fatal to all animals that contract them.

To see a gray fox in action, go to: http:/www.desertusa.com/video_pages/du_gfox1.html