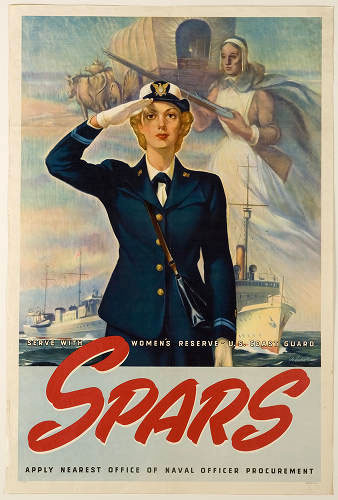 Barbara Courtney Gouge joined the U.S. Coast Guard Women's Reserve program, called SPARS, in 1943 during World War II. She spent 2 years with the Coast Guard. In an oral history interview she shared details of what her life was like in the military as a woman during that era. In 1942, President Franklin D. Roosevelt signed the law creating the woman's branch of the Coast Guard Service. Like its Navy counterpart, the WAVES, the program was designed to address wartime shortage of men in sea service by replacing them with women in shore stations.

Barbara Goode Courtney was born on August 18, 1920 in the city of Hickory in Catawba County, North Carolina to parents John Jr. and Elizabeth Goode Courtney.

Barbara Courtney lived in Hickory, Lenoir and Morganton while growing up, and she attended Greensboro Women's College (now UNC-Greensboro). She was employed as a stenographer for a finishing company in High Point when World War II began. In an oral history interview, she recalled learning about the war from news reports on the radio and becoming "more patriotic by the day" after the bombing of Pearl Harbor on December 7,1941.

When she decided to enlist in 1943, she traveled to Miami, Florida where her father was living and enlisted there. She joinged the U.S. Coast Guard's Women's Reserve program, known as SPARS. After enlisting, she took the train from Miami to New York City for basic training at the Coast Guard's Manhattan Beach Training Station in Brooklyn. In an oral history interview, she recalled many aspects of life in the barracks at Manhattan Beach and of her training there. After basic training, she stayed in the training center and became a secretary in a correspondence unit for the Coast Guard, spending a total of two years in the service. Of her time there, she recalled that military service taught her to be more respectful and to be a good friend. She recalled making lasting friendships during her time in SPARS.

She met her husband, Charles Henry Gouge, an officer, during her Coast Guard training period. But she recalled that she was not allowed to date an officer or date on the Coast Guard campus.  After they left the service, the couple were married on February 23, 1946 in Guilford County, North Carolina and they eventually had five children. Gouge was born Milledgeville, Georgia and attended the U.S. Naval Academy. According to his obituary, the couple lived in Washington, D.C. where he was with the fire department for thirty years. They moved to Raleigh in 1970. Charles Gouge passed away on August 19, 1998 in Raleigh.