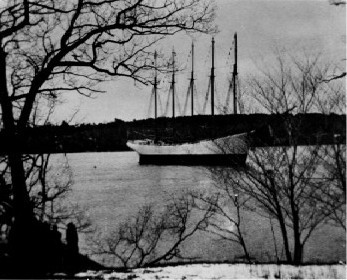 On January 31, 1921, the impressive five-masted commercial schooner Carol A. Deering was found wrecked on Diamond Shoals off Cape Hatteras.  At the time, she was returning to Newport News from a trip to Brazil.  Built in 1919 by the G. G. Deering Company in Bath, Maine – a town known for its boatworks – the ship was among the last wooden schooners built before their eclipse by iron shipbuilding.

Two days prior to discovery of the wreck, the Cape Lookout lightship reported seeing the ship. On the morning of the 31st, the Coast Guard discovered the foundered boat, ostensibly abandoned, life-boats missing. When the seas calmed four days later permitting the Coast Guard to reach the ship, abandonment was confirmed, crew, navigational equipment, belongings, and documents gone, but with a twist: dinner was on the stove and the captain’s cabin chaos.  A few months later, the ship was hauled from the rocks and dynamited to eliminate hazard to other ships.


The mysterious circumstances of the wreck became the subject of investigation which included a visit to Dare County from the FBI. Various explanations for the cause surfaced, including effects of the Bermuda Triangle, Bolshevik pirates, and mutiny.  Although such explanations were discredited by investigation, the cause remains a mystery.