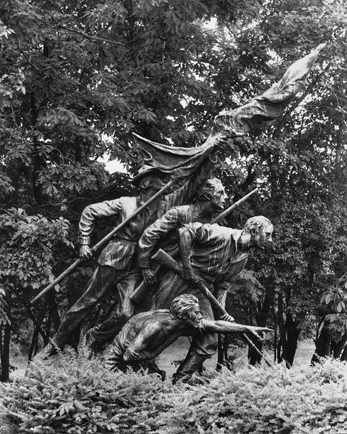 The monument to North Carolina soldiers who fought and died at the Battle of Gettysburg (1-3 July 1863) during the Civil War was created by Gutzon Borglum of San Antonio, Tex., at a cost of $50,000. The sculpture was unveiled on the battlefield on 3 July 1929. Sculpted in bronze on a base of North Carolina Balfour pink granite, the monument includes five images of charging Confederates and stands 12 feet in height. It is situated on West Confederate Avenue, where the North Carolinians emerged from the trees to join Pickett's Charge on 3 July. At the end of a flagstone walk from the avenue to the monument are two inscribed Balfour pink granite markers provided by the North Carolina Division of the United Daughters of the Confederacy. The main inscription on the larger monolith praises North Carolinians who fought at Gettysburg. The smaller tablet lists the North Carolina regiments that were there. Governor O. Max Gardner presided over the unveiling ceremony, while former governor Angus W. McLean, who just two years earlier had asked the legislature for the funds to build the monument, made the principal address to a crowd of several hundred.

Ralph W. Widener Jr., Confederate Monuments: Enduring Symbols of the South and the War Between the States (1982).

"An Act to Create the North Carolina Gettysburg Memorial Commission and to Prescribe its Powers and Duties." Public laws and resolutions passed by the General Assembly at its session of 1927. Charlotte: The Observer Printing House, Inc. 1927. p.89. http://digital.ncdcr.gov/u?/p249901coll22,237783