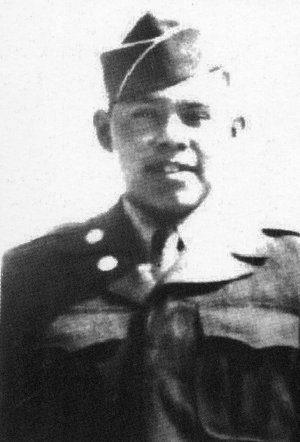 Charles George, member of the Cherokee Tribe and Korean War hero, was born on August 23, 1932 within the Qualla Boundary of North Carolina. Given the named “Tsali”, translated as Charles or Charlie, he was a member of the Eastern Band of the Cherokee and grew up in the mountain community of Birdtown where his family lived along the Oconaluftee River. George enlisted in the U.S. Army during the Korean Conflict and began basic training in 1951 at Fort Benning, Georgia.

On November 30, 1952 in the early morning hours, Charles George died at the age of 20 near Songnae-dong, Korea following a military operation to capture an enemy soldier for interrogation. Private First Class George, a member of the 45th Infantry Division, Company C, 179th Regiment had sustained fatal injuries just hours the night before when he threw himself on a grenade to protect his comrades. With enemy forces near, George suffered his wounds in silence to protect his company.

Charles George was awarded the Army Medal of Honor posthumously in 1954. His parents, who spoke no English and had never traveled beyond their home area, traveled to Washington, D.C. to receive the medal. In May 2002, the Veterans Administration Medical Center in Asheville was renamed the Charles George VA Medical Center in his memory. And on January 23, 2014, a bridge across the Oconaluftee River in the Yellowhill Community was renamed for him following legislation submitted by first grade students from the New Kituwah Language Academy in Cherokee, N.C.