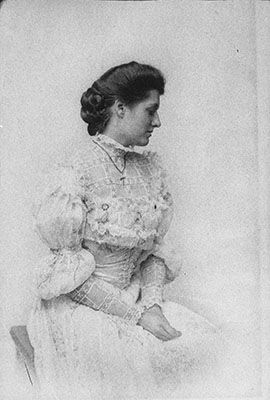 When the widowed Daniel Gould Fowle became governor in 1889, his daughter Helen became his first lady. Helen Fowle, the daughter of Fowle 's second wife, Mary Eagles Haywood Fowle, who had died in 1886, was born  June 14, 1869, in Raleigh. She attended St. Mary's in the capital city. The year her mother died, Helen Fowle also lost her older brother, Fabius Haywood Fowle, who was killed in a hunting accident at eighteen years of age. Governor Fowle was inaugurated on January 17, 1889, and he hosted a reception for state leaders following the ceremony. Contemporary newspapers indicate that many friends of the governor's daughter likewise attended  the festivities surrounding  the inauguration . W. H. Anthony, chief marshal of the reception, presented his regalia to Helen Fowle. Margaret Fowle Andrews, wife of Phillip H. Andrews, and Martha Fowle Avera, wife of David Avera, the governor's two older daughters by his first wife, Ellen Brent Pearson Fowle, attended the ceremony and  received  guests along with  the governor  and  his  younger daugh­ter. Neither of the older daughters lived in Raleigh, inasmuch as they were married and resided elsewhere in North Carolina. The Raleigh News and Observer  (January 18, 1889)  noted that "Miss Helen Fowle, in white plush, silver brocade and  diamonds, was the favorite of the ball and was indeed a poem of beauty, grace and loveliness."

Since the Executive Mansion was then unfinished, the Fowles were unable to move into it immediately. They lived in their house on the future site of the Sir Walter Hotel. Since Governor Fowle believed that the residence would never be finished if it remained unoccupied, he and his family moved into the still unfinished mansion on January 5, 1891. They brought with them some of their own furniture to supplement the furnishings the state had provided for its chief executive's residence. The Fowles' new home was uncomfortable, inasmuch as the steam heat had yet to be installed and the plumbing was not completed. Even with the addi­tion of the family's own furniture, the mansion was sparsely furnished. In spite of that situa­tion, on January 13, 1891, the governor and his daughter Helen hosted an elegant opening reception. The News and Observer declared the mansion a building of which the state could be proud. Miss Fowle, then only twenty-one years old, with her father and younger siblings Mary Elizabeth and Daniel Gould Jr. became the first family to live in the Executive Mansion , and she became its official hostess. Mary Elizabeth Fowle, who later married Walter M. Stearns, was attending St. Mary's in Raleigh . Daniel Jr. later married Helen Moore and went on to a military career.

Helen Fowle's time in the mansion was brief, as her father died there on April 7, 1891. In spite of her ministrations, Governor Fowle succumbed to heart failure in his second-floor bedroom. The funeral was a sad occasion in Raleigh and for the entire state. The senior class of St. Mary's, students from Wake Forest College, and a host of state dignitaries attended the funeral, which was held at Raleigh's First Presbyterian Church. Once again Miss Fowle's older half sisters helped her carry out her duties as hostess.

Helen Fowle remained in Raleigh, where she married Thomas Duerson Knight on July 22 , 1891. The Knights moved to Chicago, Illinois, where he had been appointed assistant state attorney, and they had two sons, one of whom died in infancy. Thomas Duerson, first of the Knights' sons, was born January 21, 1893. Helen Fowle Knight died in Chicago on May 4, 1948, of heart failure. She was buried beside her husband in his family's plot in Cave Hill Cemetery in Louisville, Kentucky.

This is true but what heart

This is true but what heart failure??? heart attack?