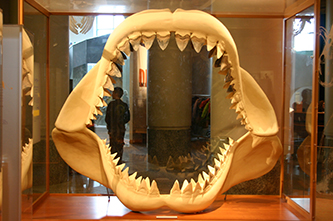 The bill was sponsored by Marilyn Avila (R-Wake), Susan Martin (R-Pitt, Wilson), Pat McElraft (R-Carteret, Jones), and Roger West (R-Cherokee, Clay, Graham, Macon). The idea for an official state fossil originated with an eighth grade science project at the Newport Middle School in Newport, N.C. Science teacher Donna Jones came up with the idea of having a competition in which students created displays for different fossils to select one to try and make the official state fossil. Students suggested sand dollars, starfish, coral, mosasaurs and sea urchins. The students voted on January 11, 2013 and selected the megalodon shark. Social studies teacher Gary Abell then contacted Rep. Pat McElraft, who adopted the idea and added it to House Bill 830, which proposed several new state symbols.

The extinct megalodon shark (Carcharodon megalodon) first appeared during the Neogene period of the Cenozoic Era, about 16 million years ago. Its name translates as ‘megatooth’ and was named because of its infamous large teeth. The Megalodon was bigger than a school bus, growing up to 50 feet long and weighing 30 times more than a great white shark. Scientists believe the megalodon had the most powerful bite of any creature that ever lived. Their jaws could exert enough pressure to crush a small car.

The Megalodon typically age prehistoric turtles and whales. When hunting, they would first bite off their prey’s tail and flippers so it could not swim away, then they would eat the animal.

Most of what we know about the Megalodon comes from studying its teeth. A shark’s skeleton is mostly made of cartilage which breaks down after the shark’s death and doesn’t fossilize. The teeth, however, are made of a bone-like substance, and can be found fossilized on North Carolina beaches and off the coast. Megalodon teeth can be as large as 6-7 inches long. Elements of the teeth suggest that they were arranged in a broad mouth, from which we can guess that the Megalodon also had a short snout.

The Megalodon went extinct about 2 million years ago, during the Miocene era. It is likely that it went extinct because it was unable to adapt to changing ocean conditions.

§ 145-41.  State fossil.
The fossilized teeth of the megalodon shark is adopted as the official fossil of the State of North Carolina.