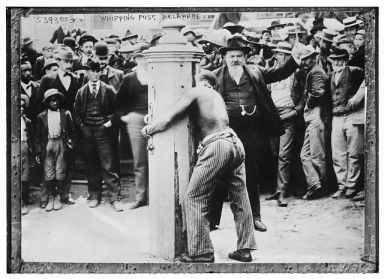 Flogging, or severe physical punishment with the use of a stick, rod, or leather strap, was used in colonial North Carolina for disobedient sailors, servants, or military and political prisoners. Flogging was also employed by schoolmasters seeking to punish or gain the attention of recalcitrant pupils.

In 1694 the Court of Albemarle sentenced a man "to have 30 lashes upon his naked back stript to the wast & severely Whipt." In another case, a man convicted of larceny had already been burned on the hand for that offense when he was sentenced in 1741 to receive 60 lashes on his bare back for a second offense. However, because of his "very sick and low condition," the whipping was remitted. Women were not exempt from such punishment. In 1705 an Albemarle County court ordered that "for breach of an Act Entituled an Act agt Fornication & Adultery" a woman was to "be punished by receiving Ten Stripes on her Back well laid on."

During the colonial period a whipping post customarily stood in front of the courthouse of every county. After 1830, reflecting a more humanitarian sentiment, the posts were located behind the building. Yet in 1846, a Raleigh Register reader was repulsed after witnessing the humiliating flogging of two men. The 39 lashes they received left each man's skin rough with welts and covered with blood. Public opinion contributed to the gradual amelioration of this cruel punishment, and in 1917 legislation permitted whipping in prison only in the presence of the prison physician. The objections of Frank Murchison, register at the Caledonia Prison Farm in Halifax County, ultimately brought an end to flogging, and the General Assembly abolished it altogether in 1925.

Albert Coates, "Crime and Punishment," in Proceedings of the Thirty-third Annual Session of the North Carolina Bar Association (1931).