Camp Lejeune prides itself as the home of the Montford Point Marines, the Corps’ first black enlistees, and the first large unit of female Marines, known as the Marine Corps Women’s Reserve. The first female Marines, 305 in number, enlisted in 1918, when the Navy Secretary allowed women to enroll for clerical duty (they were discharged in 1919). The Army, Navy, and Coast Guard all accepted female recruits in the early years of World War II, but the Marine Corps was reluctant to do so. However, faced with significant losses in the Guadalcanal offensive in the summer of 1942, Marine Corps senior officers realized it was necessary in order to free up as many male Marines as possible for combat. 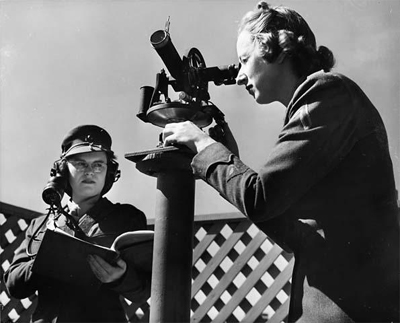 Thus, the Women’s Reserve was formed by amendment in 1942 to the U.S. Naval Reserve Act of 1938. The first women enlisted on February 13, 1943 and, as with African American Marines, Camp Lejeune, the Corps’ largest east coast base, was chosen as the training center. That summer construction was completed on the Women’s Reserve cantonment area, consisting of several barracks, mess halls, and other support facilities. Unlike other branches, the Marine Corps did not drastically relax its training regimen or admissions policies for females. About 3,000 women trained elsewhere while facilities were being prepared at Camp Lejeune. The base remained the primary source of female Marines during World War II. Over the course of the war, 23,145 women enlisted and 965 held commissions. By the war’s end, 17,672 women who trained at Camp Lejeune were on duty, including Eugenia Lejeune, daughter of the general for whom the base is named.

Enlistees were inducted into specialties ranging from cooks and clerks to transport personnel and mechanics. One-third of the women served in aviation-related fields, particularly at Cherry Point. More female Marines were inducted than African American Marines during World War II. Female Marines lived up to their motto “Free a Marine to Fight,” and were credited with the formation in 1944 of the 6th Marine Division, which spearheaded the attack on Okinawa. Without the women’s contribution in filling non-combat roles, the manpower would not have been available to form the division. After the war, the female Marines, considered expendable like their African American counterparts, were scheduled for elimination. The women’s schools were disbanded in September 1945 and the entire reserve was discharged on March 13, 1946. However, the Women’s Armed Forces Integration Act of June 12, 1948, reestablished the presence of women on active duty and females were once again inducted into the Corps. After 1948, however, all women’s training took place at Parris Island, South Carolina.