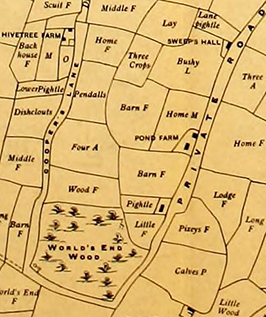 Field names were used in the British Isles to facilitate identification in farm records, to simplify the laying out of tasks, or in the discussion of seasonal plans. They also were used in wills and inventories of estates to designate specific tracts. This practice was continued in the American colonies and has survived to the present time. In North Carolina and elsewhere in the South, many field names are so old that landowners may have no idea of the names' origins. Plantation records, correspondence, and tradition, however, record many of the names. Often the name of a former owner was attached to a tract. Some characteristic of the land-a tree, a boulder, an event that occurred there, or some other source of inspiration-provided a name. Such field names as the Sophia field, the Johnson's old place, the fish pond field, the cypress tree field, the rabbit patch, horse pen ridge, the militia ground, and the like became permanently attached to the land.

Copinger, W.A. History of the parish of Buxhall in the county of Suffolk. London: H. Sotheran & Co. 1902. https://archive.org/details/historyofparisho00copi (accessed October 10, 2012).